If you’ve landed on this page there’s a good chance that you’re struggling with playing barre chords on your ukulele. Let me start by saying that you’re not alone. At one time or other every player has battled against barre chords. The good news is that there’s a way through it. Here are some tips to help you on your way…

What Is a Barre Chord?

A barre chord involves you using a single finger to fret all the strings at once. There are no open strings involved in barre chords so one of your fingers (usually your index) ends up acting like the nut of your ukulele. For newcomers they’re difficult to play to begin with because they require a combination of finger strength and dexterity that hasn’t yet been developed. 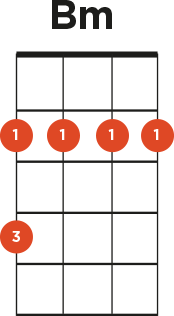 How To Play A Barre Chord

Take a look at the diagram opposite, it shows a chord box (help with chord boxes here) for a B minor chord. To play this chord you’ll need to lay your index finger across the second fret and press quite hard (so that it actually squeezes down every string). On top of this you’ll need to fret the other note using your third finger.

Essentially your index finger is now acting as the nut of the ukulele and you’ve just created a moveable chord shape.

One Finger At A Time

To begin with, if you’ve never played a barre chord before we’re going to take this one finger at a time. We’ll start with the finger that most people struggle with – the index finger. Let’s start by laying your index finger across fret 2. Try and get your thumb directly behind your index finger on the neck – you’ll need to use it as support.

Strum down slowly across the strings and make sure that each string sounds clear and that there are no muted notes. If you are hearing a muted note somewhere then there’s a good chance that you’re not putting enough pressure on the fret.

I’d recommend just working with your index finger initially and barring at various frets. Get your hand used to squeezing the barre down – to begin with stay below fret 5 (it gets a bit cramped further up the neck). You can see on the image above that I’m alternating between barring at fret 2 and 3, you can mix it up a little more though.

Rather than squeezing harder which will soon tire your finger out what I want you to do is to rotate your barring finger back towards the nut very slightly. This puts your finger in a much stronger position and requires less pressure to actually make a string connection. Notice the slight rotation on the image below after I lay my finger on the second fret.

With your first finger now barring a fret give it a strum and then ease back off the pressure a little bit. Keep your fingers in position but let them relax. When your finger is relaxed again, squeeze and give it another strum.

When you first start learning barre chords you’re going to be putting your index finger through a crazy workout. It will tire quickly and cramp up and basically do all it can to end your barre chord career as early as possible.

What you need to do is squeeze for the minimum amount of time possible. You only need to hold the squeeze for the duration that you want the chord to last. Any more and it’s wasted effort.

One more tip that I would fully recommend doing is committing to practising your barre chords every day. Practise for 5 minutes on barre chords a day and you’ll master them in no time at all. If you’re looking for a song to practise barre chords on I’d recommend giving Creep by Radiohead a try!

Hopefully these tips will help you on your way to master barre chords!