A tuner is a bit of a necessity if you’re a ukulele player. They’re inexpensive, easy to use and usually pretty accurate. I highly recommend that all beginners grab themselves a clip-on tuner but they’re also pretty useful to have around whether you’re a gigging musician or just enjoy playing at home.

Tuners come in all different shapes and sizes and also function differently too. Personally I think clip-on tuners make a lot of sense. They’re always attached to your ukulele so you don’t lose them, they work from vibrations rather than using a microphone (which means you can still tune up in a noisy environment) and they’re very cheap (always a bonus).

If you’re buying a ukulele for the first time then 100% I’d recommend picking up a clip-on tuner too.

There’s a lot of choice on the market when it comes to clip-on ukulele tuners, here are some of the best. All of the below are vibration based clip-on tuners that aren’t exclusively ukulele tuners and will work on any stringed instrument as well as a ukulele so if you play a bit of guitar you’re in luck. 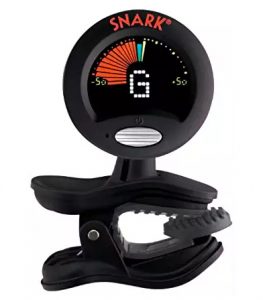 The Snark is an incredibly popular clip on ukulele tuner that is a little bit more versatile than most. It has a bright, full colour display which is really easy to see. The SN6 has a full 360° rotation which means however you decide to clip it onto your ukulele, whether you’re right or left handed you’ll be able to see the display.

Snark have a whole range of tuners that vary in features. The more expensive ones have built-in mics and metronomes.

Not the most subtle looking clip-on tuner in the world but the display is so easy to read and they’re really easy to use. It comes as no surprise that Snarks are so popular. 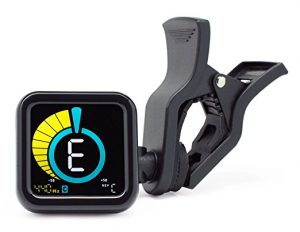 The Kliq is a little bit more expensive than the Snark. One feature that I really like on the Uber is it’s super bright, large display. It’s really easy to read and it’s incredibly quick to detect the note you’ve played (a little faster than the Snark which is no slouch).

Kliq are really confident about the Uber Tuner, so much so that they offer a 3 year warranty with every purchase. 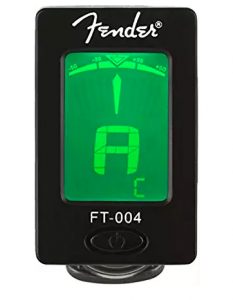 Fender’s FT-004 is a chromatic clip on tuner that has modes for violin, guitar, ukulele and a general chromatic setting too. It has a single colour display which is relatively small (in comparison to the Kliq and Snark) but still quite easy to read.

I personally use a Fender FT-004 and have done for a number of years now (also I’ve never changed the battery which tell you something). It’s single button makes it easy to use and it does the job. From around $8. 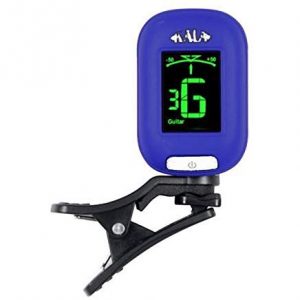 Kala’s clip on tuner shares a lot in common with Fender’s FT-004. It’s a single colour display with multiple modes for other stringed instruments. It’s at the cheaper end of the tuner market and favours a small price tag over features. From $10. 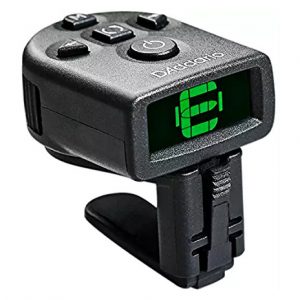 This clip on tuner is pretty much on a par with Kala and Fender’s efforts with a rather useful exception: it’s really quite small. Where the Snark sticks out like a sore thumb, the NS Micro is way more subtle yet still clear enough to read. Again it’s a chromatic tuner with multiple instrument modes. Best suited for those that are looking for a more discrete tuner. From $10.

There’s not an awful lot in it when it comes to clip-on tuners. They all do a pretty good job and the differences between them are quite minor. For me the decision maybe comes down to other factors rather than performance such as the size and clarity of the display.

If you’ve bought a ukulele for someone else as a gift or for whatever reason then do them a huge favour and buy them a clip-on tuner too!

5 thoughts on “The Best Ukulele Tuners”