The Daily Ukulele is a book I’ve been meaning to buy for quite a while now. It’s incredibly popular, particularly with ukulele clubs and groups. I figured it was time to buy it and having owned it a while, here are my thoughts…

The concept of Jim and Liz Beloff’s Daily Ukulele is a pretty simple one. There are 365 songs for you to learn, one for each day of the year (hence the name). At around $25 (£20) that works out at about 6 cents (5 pence) a song.

Who Is It For?

The Daily Ukulele is mainly aimed at beginners and possibly intermediate players. Beginners will get a lot from simply the volume of songs to go at with chord boxes and lyrics present. Intermediate players (of which I consider myself one) may get something from having the melodies available to form their own arrangements. It’s just generally a pretty handy book to have around.

Each of the 365 songs contained within The Daily Ukulele has a lead sheet, chords and lyrics. For those that are wanting to just strum and sing that should keep you busy enough. Part of the appeal with The Daily Ukulele is the sheer amount of songs and for that reason it’s a great starter book if you’re running a ukulele club or group (or just fancy a strum with friends). 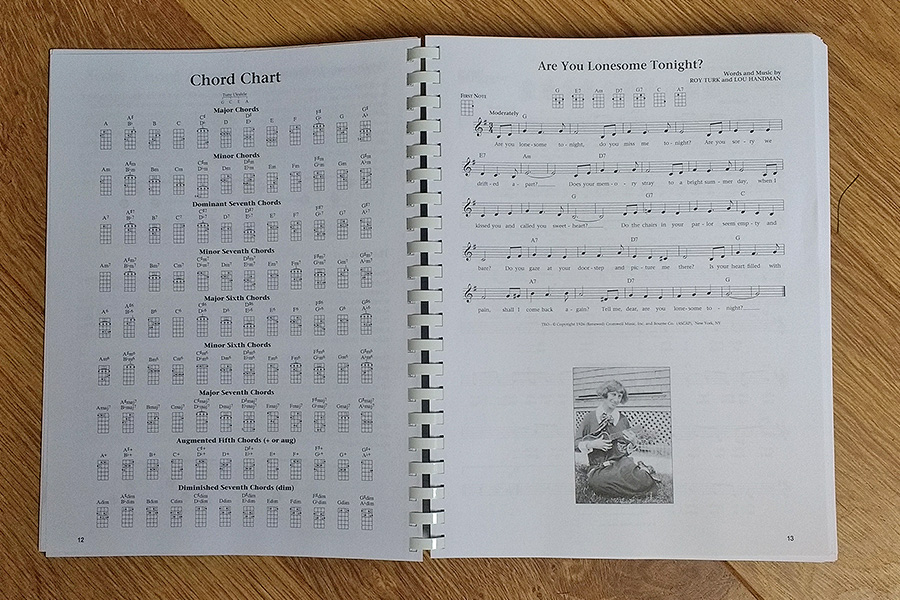 I should point out that if you’re the kind of person that wants some steer on strumming patterns you’re not going to get that here, you’re left to work them out on your own which isn’t a bad thing but it’s worth knowing before you buy. If I’m honest I think it would be a more useful book if it also indicated strumming patterns but to be fair it’s selling pretty well without my constructive criticism!

It’s just generally a pretty handy book to have around

For those that want to go a little bit beyond strumming and singing you get the melody written out in musical notation. I found this to be really useful, particularly as I’m interested in playing duets and also in creating my own chord melodies. There’s no tab for the melody lines though so if you’re not up to speed with musical notation you may not find that too useful.

Also included in The Daily Ukulele is a general introduction to the ukulele which covers holding the ukulele, how to form chords, play strums and more. There are also sections on chord alternatives and a reference chord chart which is always handy.

The song list is a bit of a mix. If I’m honest there are quite a lot of songs that I’ve never heard of but this may be due to the fact that I’m British. I get the feeling that if you’re from the US you’ll know a lot more of the song than I do. There’s something about playing songs that are familiar to you that really makes learning more enjoyable. That said, it’s always good to step out of your comfort zone to really aid your progress.

To give you an idea of what you can expect to be learning there are songs here from The Beatles, The Beach Boys, Bob Dylan, Elvis and more. Also present are some classic American folk tunes, Christmas songs and some for the kids to learn too. 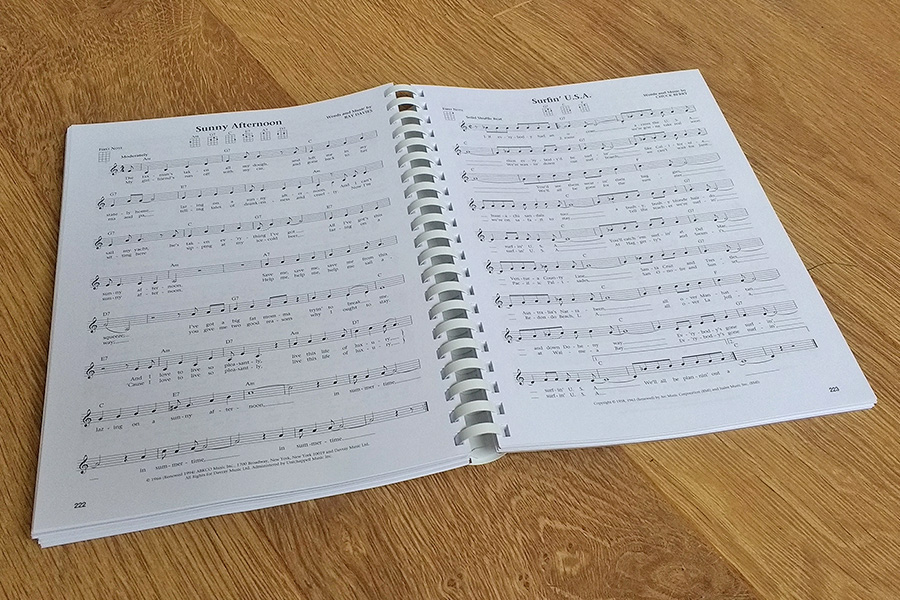 One thing that is a godsend with The Daily Ukulele is the comb spine which allows you to completely open the book out flat. It sounds like a simple thing but it counts for a lot when you’re trying to read and play at the same time. The book feels like a ring binder which is no bad thing at all.

Perhaps the cover could be a bit more rigid though, it’s a little bit floppy meaning you may need to give it a little bit of extra support as it can’t really support itself.

The large format of this book makes it pretty easy to read and the notation is nice and clear too, it was a smart move to go for the larger size and I think most players will really appreciate this.

Overall I think The Daily Ukulele is a really good purchase, particularly if you were brought up in the US as you’ll be more familiar with the songs within it. It definitely offers value for money and should prove to be a book that you’ll return to time and again.