Having never played a plastic ukulele of any sort before I wasn’t really sure what to expect with this one. For around £35 you’re getting an ABS plastic backed uke with a laminate soundboard. The fingerboard, nut, saddle and slotted bridge are all plastic too – the neck is a very smooth wood with geared tuners fitted to the headstock. This is all topped off with a set of Aquila strings. As mentioned above, it’s a soprano uke but it does have 15 frets which I have to admit, I do like on a soprano. 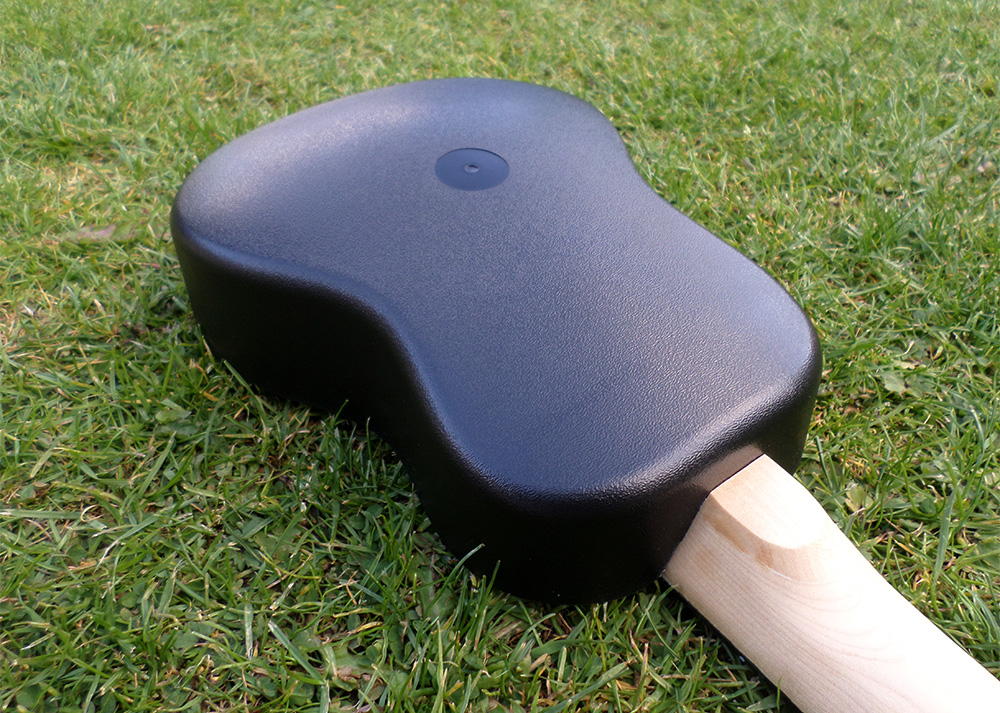 I guess the first question if you’re not familiar with plastic (in any part) ukuleles is why? What’s the point? Well, certainly with the Mahilele there’s a few reasons that spring to mind – firstly using a mould to make large parts of an instrument is going to work out pretty cost effective. Secondly it’s pretty durable and if you’re aiming at a younger market which I think the Mahilele almost certainly is (judging by the design) then that’s very useful. It should also stand up a fair old beating (a blessing in my house) and be pretty useful for playing outdoors. 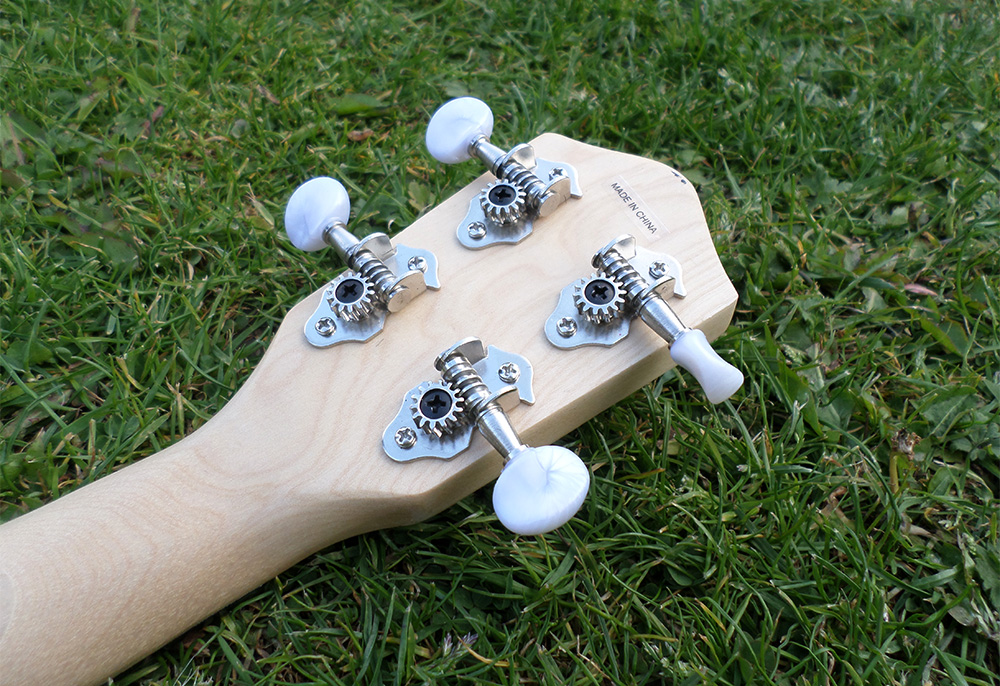 If you’re used to playing more traditional style ukuleles like I am then it’s going to feel a bit different. It’s actually pretty comfortable to hold, the rounded back sits well against your body and it’s a little heavier than a standard laminate ukulele. The one I have, well it’s an interesting look – it’s kind of hard to see past the graphics (which you should be able to tell from the pictures) but as a 36 year old man, I doubt they’re aiming it at me! Flip it around though and the black ABS against the light neck has a bit of a jazz vibe about it.  I should point out that there are loads of other styles and colours  available if you’re not a fan of toucans (if it is it a toucan)!

The build quality is about what you’d expect at the price point – there’s a few minor issues on mine such as the fretboard slightly separated from the neck where it meets the body and the tuners look a little cheap but do the job just fine, these are minor gripes and I’d trade cosmetic issues for sound quality any day of the week. 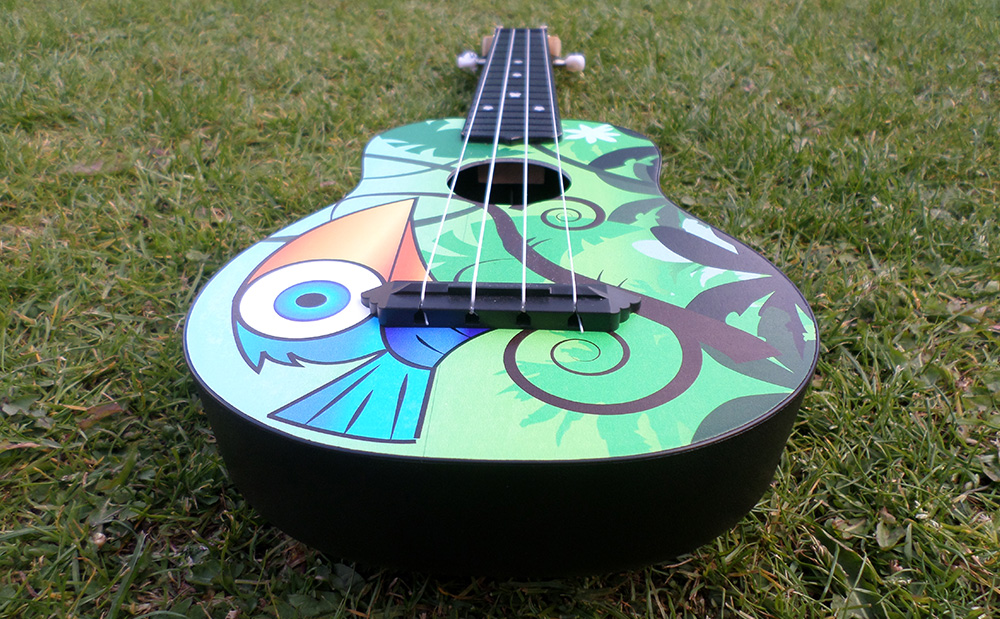 The sound completely shocked me, it’s not like other ukes that I’ve heard around this price point which admittedly are usually all laminate. It’s loud, really loud in fact. It has a deeper tone than I expected and doesn’t suffer from that cheap tinny sound that you get on a lot of entry level laminate ukuleles. I’ve heard the sound described as full and that’s probably an accurate description. The more I play it, the more I like the sound. Having not played any other plastic backed ukes it’s difficult to compare but I can only assume that the curved, bowl shaped back is helping to give it this sound.

A couple of things took me a little bit of getting used to on this uke initially – firstly the frets, they’re absolutely tiny which isn’t so much a problem as just, well different. Also the fact that they’re the same colour as the fretboard – weirdly I actually do look at my frets a lot when I’m playing (does anyone else do this?), so not being able to quickly see as I was playing was strange to begin with. This is probably a good thing though, I really could do with spending more time playing by feel alone.

If you read a lot of ukulele reviews then you might be thinking, hang on – I’ve seen this ukulele before. Well, you’d right (in a way). This uke is essentially the same as the Alic Soprano (they’re made in the same factory) but there is just one small difference. The Mahilele comes with Aquila’s super nylgut strings whereas the Alic uses Aquila’s new nylgut. 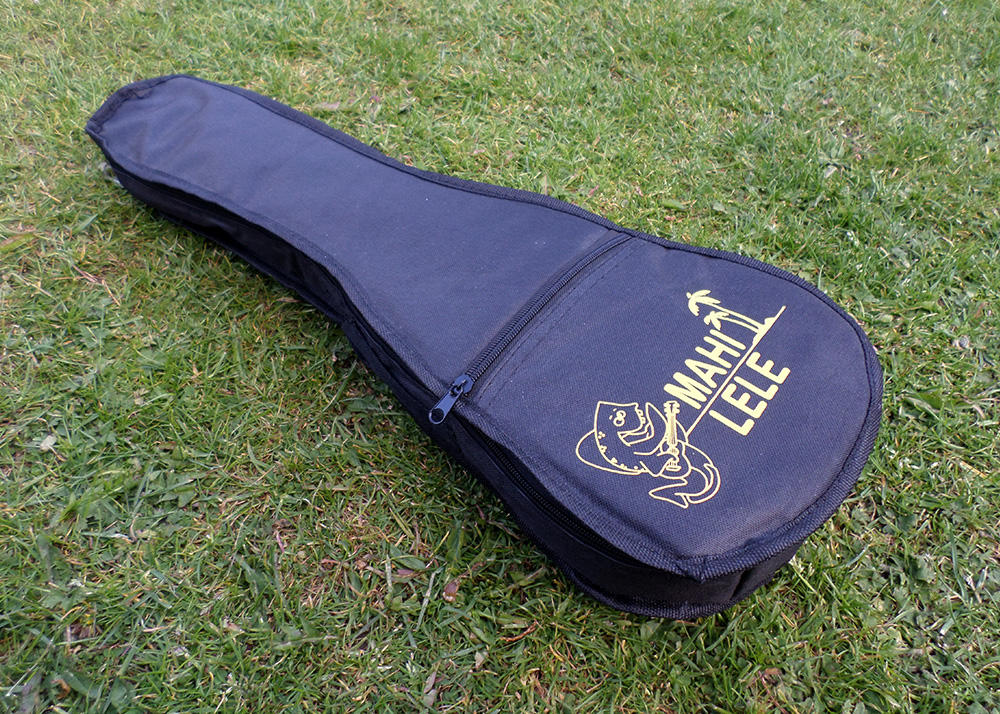 If I were the distributors of the Mahilele then I’d almost certainly be looking to get this one into schools, more and more schools seem to be turning to the ukulele for their music classes. It plays well, it’s a decent price and it’s durable – oh and a slotted bridge is always a good thing on a school uke.

Final thoughts on the Mahilele

I’ve been playing this uke pretty much non-stop since it arrived, there’s something about the tone on this that makes you want to play it. It’s got a slightly unusual sound but in a good way. There’s a few little niggles but really nothing to worry about. If you’re looking for a durable ukulele for around £35 that’s got a great tone then I would definitely recommend taking a look at a Mahilele – I can’t put the thing down!