Update: There is a new, updated review of the Outdoor Ukulele Tenor

All the way from Bend, Oregon the Outdoor Ukulele Tenor is a take-anywhere polycarbonate ukulele. I’ve had mine for around a month now. Here’s my verdict…

Although I’ve never owned a fully plastic ukulele before I’ve played my fair share that were partially plastic and generally I’ve liked them. I like the way the plastic projects the sound and the booming tone that you get. 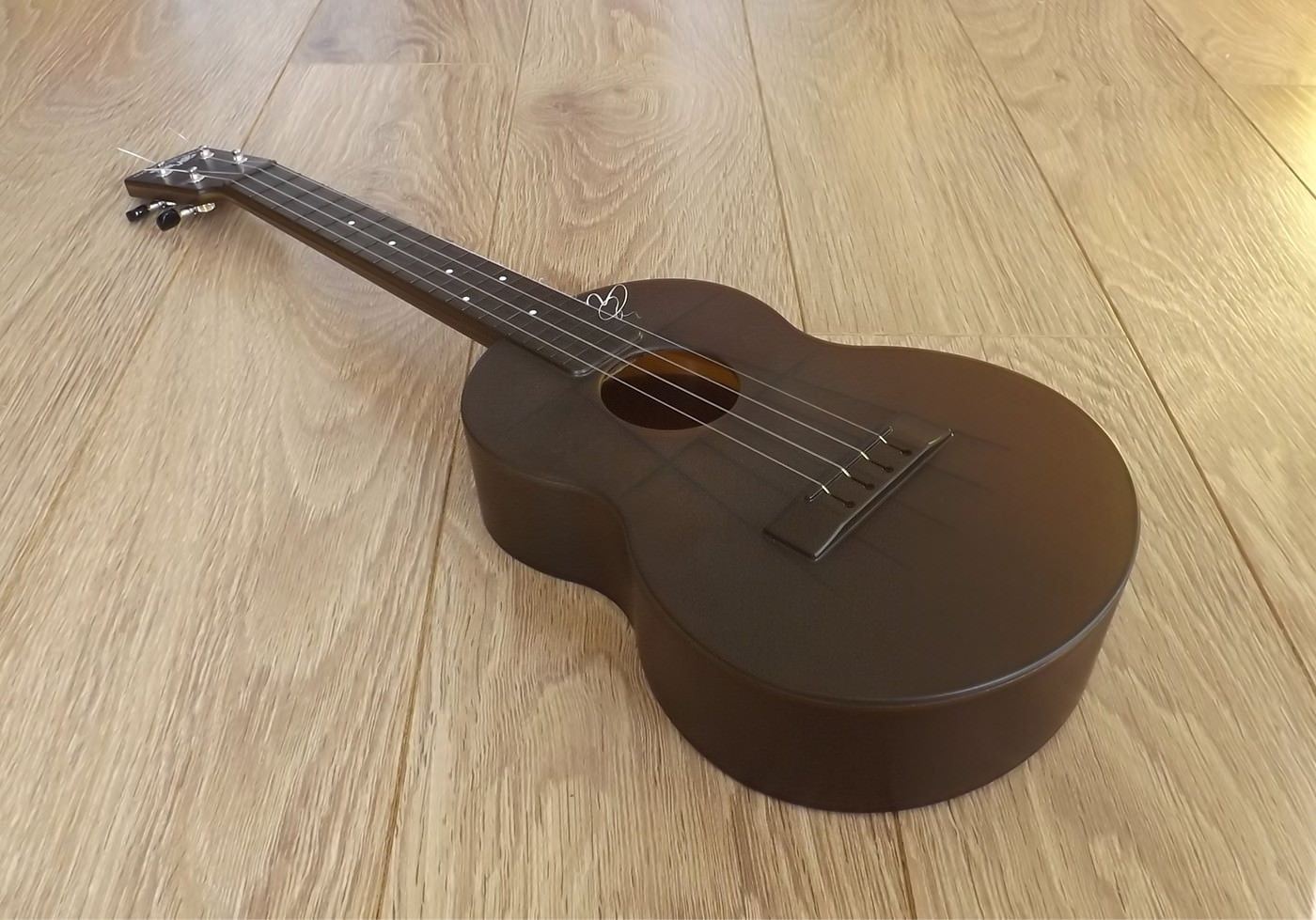 The outdoor tenor costs $145 and is constructed from 2 injection moulded pieces of composite polycarbonate plastic. It comes with Grover tuners and Rye Rabbit fluorocarbon light gauge strings. Barring the tuners everything here is plastic: bridge, saddle, nut – it’s not a ukulele that you’ll be tinkering with too much (if at all).

The first thing that struck me about this ukulele was the setup. It’s the best setup ukulele I’ve ever played – the action and intonation are bang on. It just feels good in the hands and it’s really nice to play. On this point, it’s important to know that various things have been improved on the tenor model over the previously released soprano – the neck receiving the most attention and for me it’s great to know that Outdoor are listening to their audience. 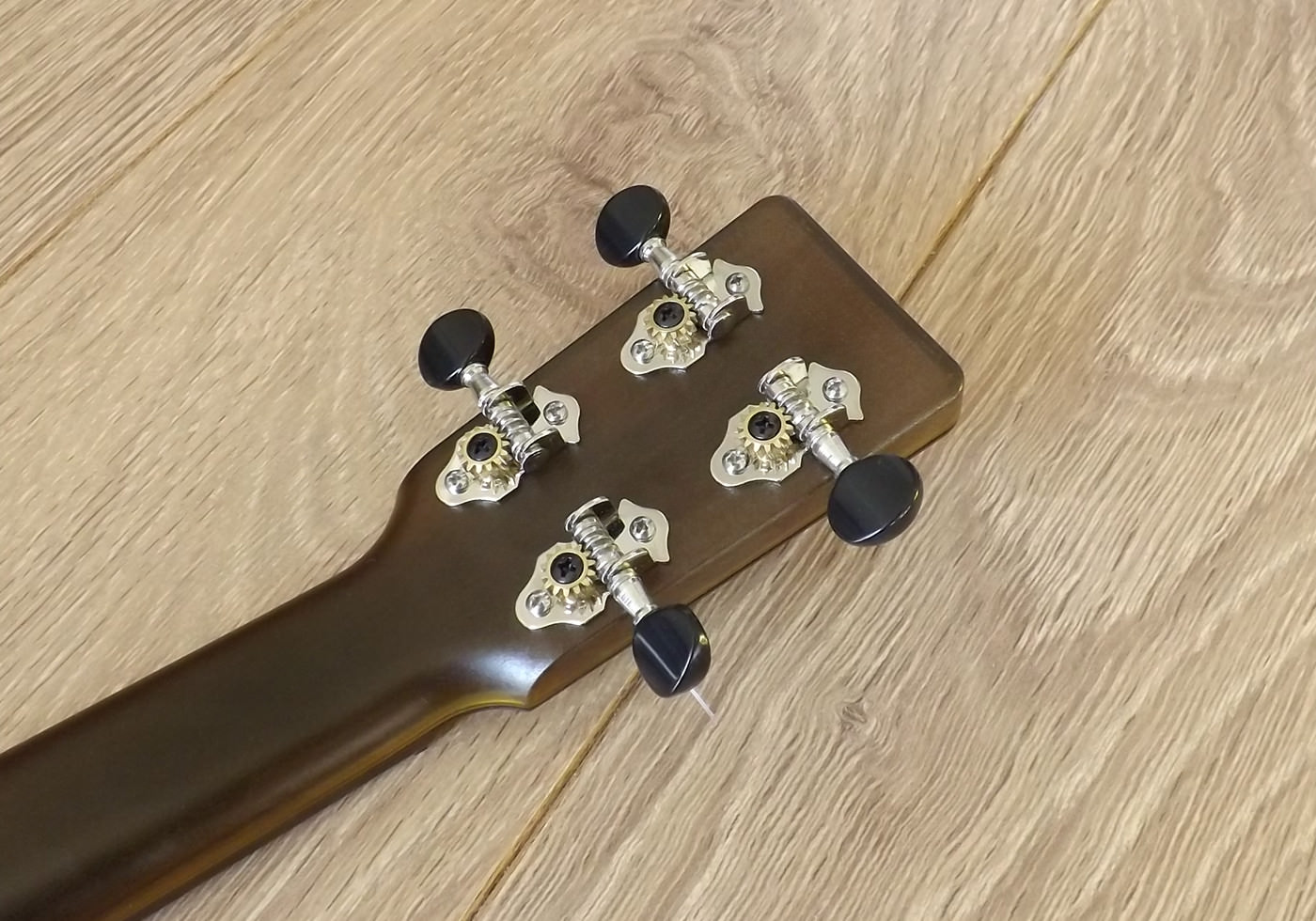 Although I’m a bit of a traditionalist when it comes to ukuleles, I have no problem with plastic efforts, they serve a purpose that most players could benefit from. I don’t mind the way the outdoor ukulele looks but its never going to compete with a beautiful piece of wood.

The Outdoor tenor comes in brown, green or gold – as you can tell from the photos, I went for the brown. In the hands the polycarbonate feels pretty good, there’s a texture to it that stops your hands slipping around when playing and it’s got a nice weight to it too. The construction of this ukulele is really good, you can see a lot of thought and attention has gone into the design. 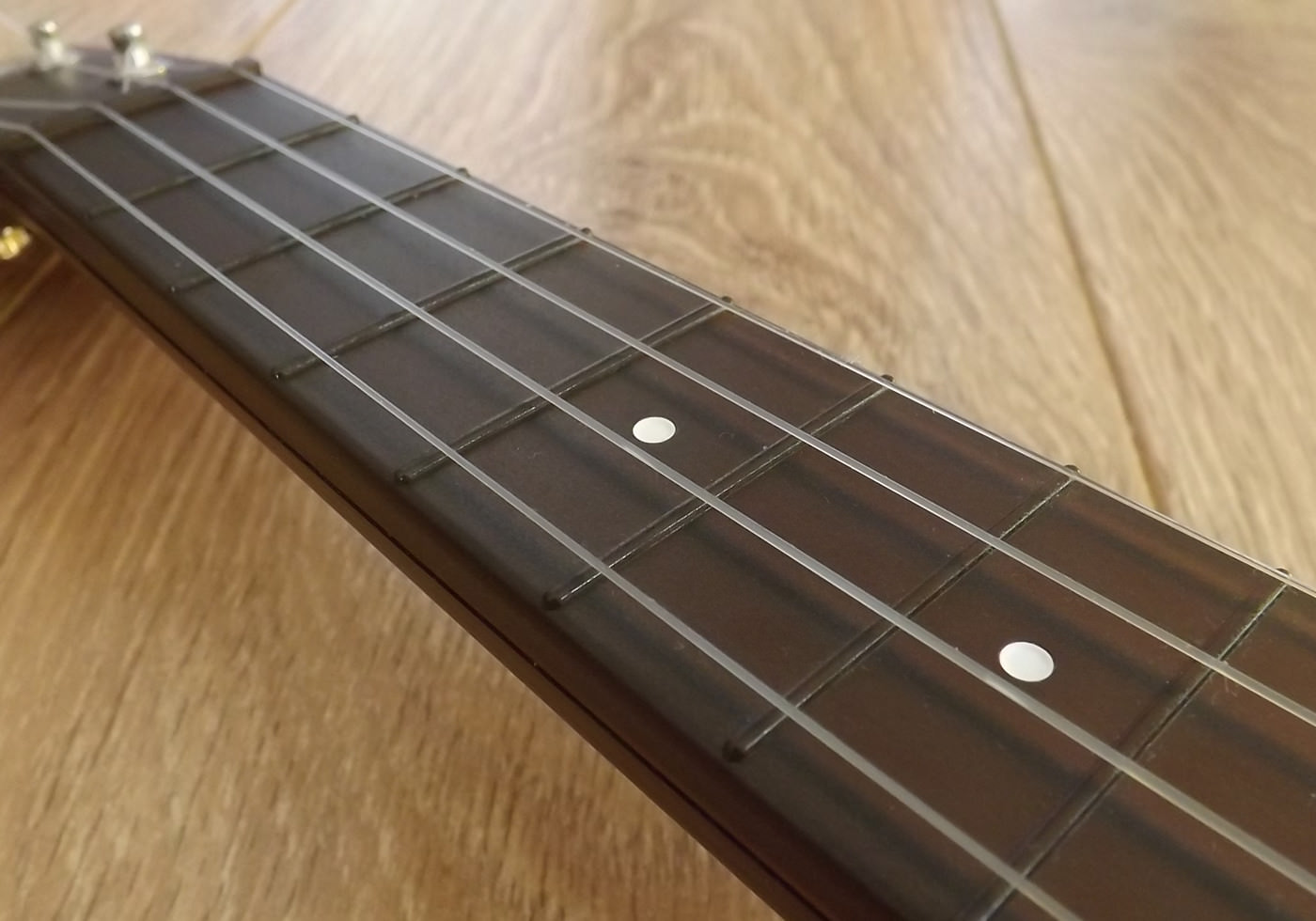 I really like the neck on the Outdoor – for the main part it’s rounded but it has a flat area on the back too. I find it really comfortable to play and it’s a significant improvement from the square neck that featured on the Outdoor soprano.

One thing I always like in a ukulele is the ability to be able to take a knock or two. I have 2 rough and tumble sons and I’ve lost count of the times I’ve heard the sound of a ukulele being knocked over. The outdoor is probably as solid as you’ll get on that front. I had a few reservations about the hollow neck before it arrived in terms of how rigid or it may or may not be but I’ve not seen anything to concern me in the time that I’ve owned it.

It’s definitely got its own sound. It’s kind of clicky – sound is always difficult to describe but it’s quite punchy. There’s a very strong percussive nature to it and try as I might to determine why, I haven’t quite worked it out yet. 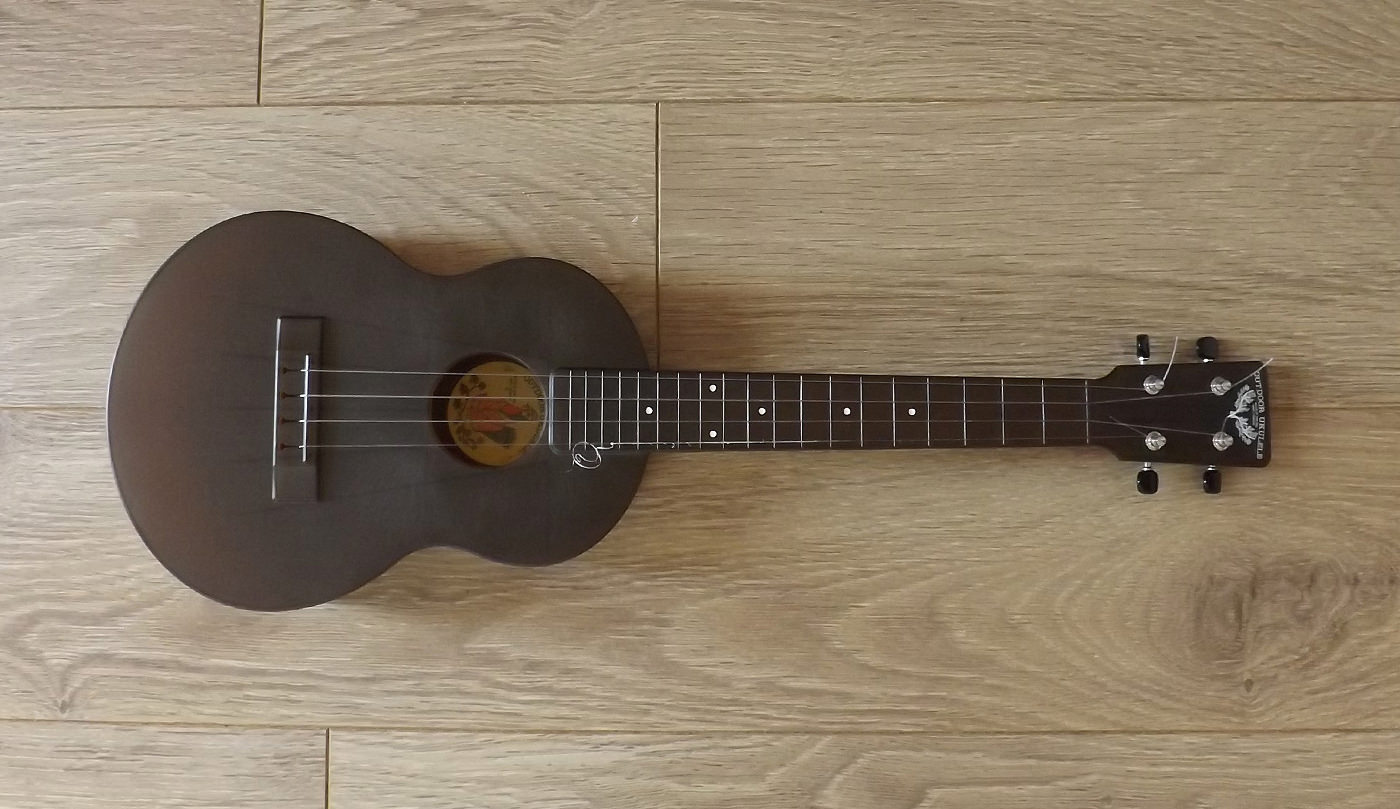 Much like all the plastic ukuleles that I’ve played so far, the sound has surprised me. It’s clearly different to that of a wooden ukulele but it isn’t a bad sound by any stretch. I’ve heard a few players do some nice things with fingerpicking on the Outdoor but for me it’s a ukulele that is better when strummed.

I’m a little but unsure on the strings and how much of an impact they’re having. As I’ve mentioned before I’m an Aquila man normally but I’m open to others too. The Rye Rabbits are better than I expected them to be but the sound seems to fall away a little – again I’m not 100% sure if this is down to the strings or not. It will be interesting to hear the difference when I throw different set on it. I’ll update this review when I’ve done that. 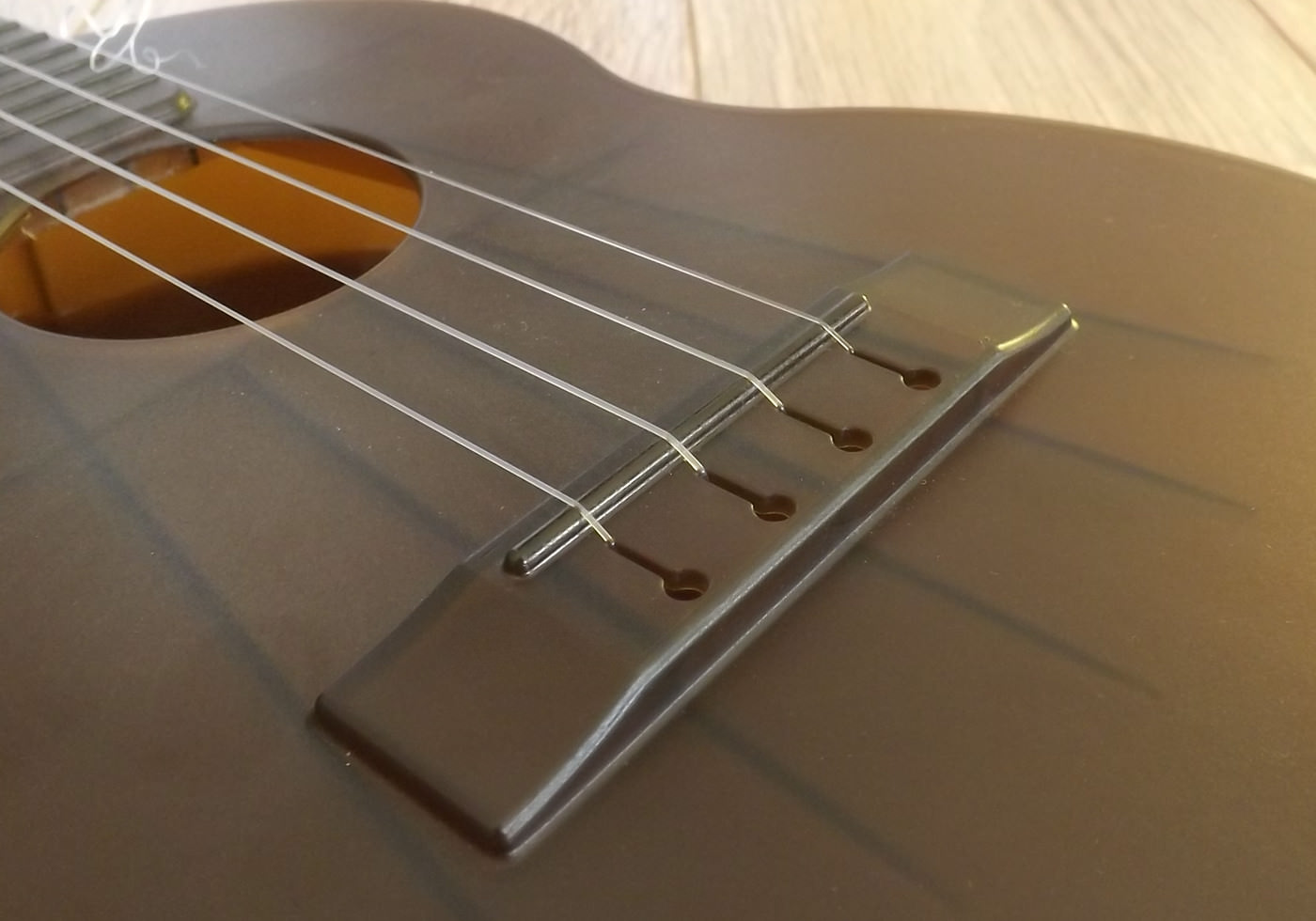 UPDATE: The eagle eyed among you will see that my Rye Rabbit A string has split – and wouldn’t you know it happened just before I started taking the photos. This is a little bit annoying as it means I can’t add any audio files or make a video until get some new tenor strings. What I will say is, I’m not putting this split down to any issue with the Ry Rabbit strings, I think the string got a nick in it at some point.

For me the Outdoor Tenor is a pretty good ukulele that occupies a slightly unusual position. There’s not a huge amount of choice when it comes to plastic tenor ukuleles but it’s the most expensive that I’ve seen – all in all it does a pretty good job across the board. If you’re in the market for a tenor ukulele that can take a bit of a beating and you’re planning on taking it with you on a few trips then I’d say go for it. 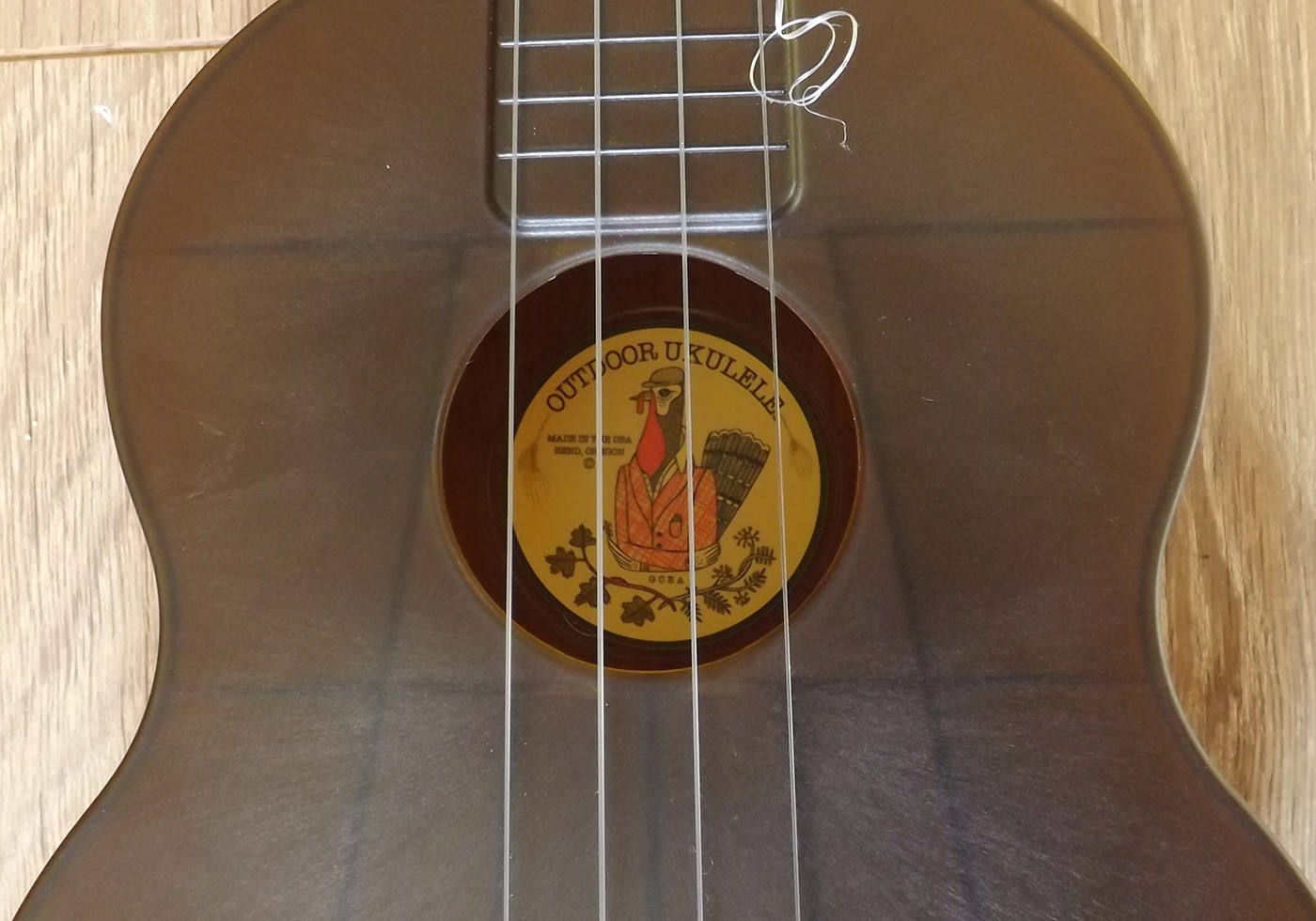 One final thing, at the time of writing I don’t think Outdoor Ukulele currently have a distributor in the UK so you’ll be hit with a fairly considerable import duty (around £30) if you order one direct. Be warned. My advice to the makers of the Outdoor is to get a UK distributor sorted fairly sharpish if they’re interest in the UK as a market.