The ukulele is a great little instrument, but there are times when playing the chords exactly as they are written can get a bit, well… boring. There are hundreds of simple songs which have bar after bar of one chord, followed by lots of another, maybe a third, and then back to the first. Repeat for several verses, and it starts to cry out for a bit of variety.

I am going to look at something which is very easy to do, and can make the simplest song sound a lot more interesting.

Strictly speaking you are adding loads of extra chords, but if you saw the song written out like that, it might put you off. I prefer to think of it as adding an extra note or two to an existing chord, usually with just one finger, sometimes for just one strum, sometimes for longer.

Spicing Up A C Chord

Strum it a few times, up and down, whatever rhythm you like. Keep going… and going… and now let’s add something. If you are using your ring finger to hold down the top string, add your middle finger to the third fret on the E string – 0033, and then quickly take it off again – 0003. 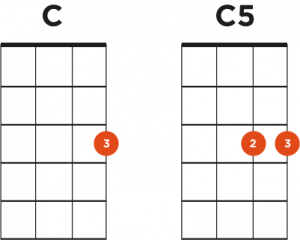 Keep repeating that – just drop the finger on to the E string for one strum, then off again. See if you can build it into a steady rhythm. (See the video for an example or two)

Here comes the musical theory bit (NOT ESSENTIAL!) – what you are doing is switching between C major and C5. But who needs to know that? It just sounds a bit more interesting than bar after bar of C major.

Now let’s try another variation – 0013. Play good old C (0003) and then drop your index finger on to the first fret of the E string for one strum, then take it off again. That one is Csus4, but again, I just think of it as C with something added. 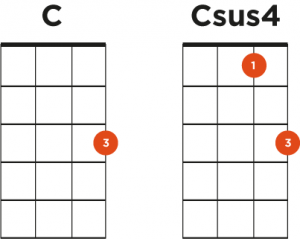 Another thing to try if you have several bars of C is to take something off! As you are strumming, just lift your finger off for a fraction of a second (0000) and then back down again, which means you are switching from C to C6 (which you might know as Am7 – they are the same) and back to C. 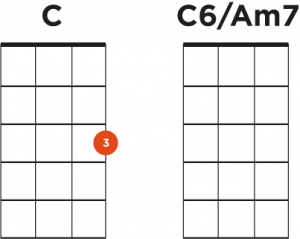 At this point I will say that you can’t always do this – sometimes it just won’t sound right in the song you are playing. Maybe one of the variants will sound OK, but the others won’t. But if it does sound right, try it! Maybe do one verse without, and one verse with. Just play around and see what works.

Moving on to other chords, you can spice up a G (0232) by dropping your little finger on to the A string, third fret (0233), and also by taking your finger off the A string completely (0230). Try moving between those three and see how it sounds. If you need the theory, that’s Gsus4 and Gsus2. But again, you don’t need to know the theory to do it. Another option with G is to take your finger off the E string (0202) which gives you G6. 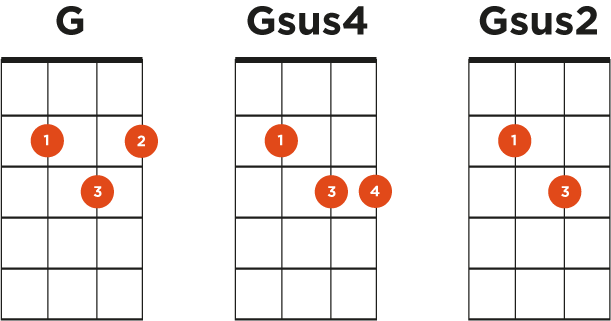 G7 (0212) can have similar alterations made. Add your little finger to the A string, third fret (0213) or do it by sliding your ring finger up from the second to third fret on that string and back down again. Or take it right off (0210). Take two fingers off (0010) and you have something else which can work if you fit it into the right spot.

The moral of this tale is to play around. Start with a simple chord, and just try changing a note here and there. Sometimes it will sound wrong, sometimes it sounds…mmmm…that might work…

Away you go, and never play four bars of C again!

Huge thanks to Steve Phillips from York for contributing this fantastic post to Ukulele Go!

10 thoughts on “Spicing Up Simple Chords”