This riff from The La’s self titled 1990 album was a massive hit and hugely overused on the Mike Myers movie from 1993 So I Married An Axe Murderer. I also seem to recall Sixpence None The Richer (think Dawson’s Creek) doing a cover of it that was pretty terrible.

Here’s the tab for it, it’s a bit awkward up there at the 10th fret (especially if you’re playing on a soprano) but I can’t really squeeze it in anywhere else without changing the key. 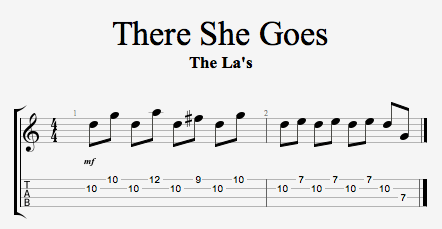 Hope you find it useful!

One thought on “There She Goes – The La’s Ukulele Riff”