It’s time for a little more music theory, don’t worry though, we’ll take it nice and steady. Today we’re looking at major chord construction, which is really useful to understand for a number of reasons.

All major chords comprise of just 3 notes. This may seem illogical as for the most part you’re used to strumming all 4 strings when playing chords. 4 strings mean 4 notes right? Sort of.

When you’re playing a major chord on ukulele and you’re strumming every string, you’re actually playing just 3 notes, it’s just that two of them are the same note. You’re essentially doubling up one of the notes and playing it twice.

For those that came to ukulele from another instrument such as guitar, the same principle applies, you just happen to double up more notes on a guitar as it has more strings in the first place.

Let’s take a chord as an example and we’ll use the A major chord. Second finger, second fret of the G string (top) and first finger, first fret of the C string (next string down). Take a look at the chord box to help you out.

Technically, as a major chord only comprises 3 notes, you don’t need to play both A notes to play an A major chord. You could just strum the top 3 strings, or equally you could strum just the bottom 3 strings. Whichever you choose, you’ll find all the notes you need for an A chord are contained within. That’s the notes A, C#/Db and E. Have a look at the diagram below which should help illustrate this. 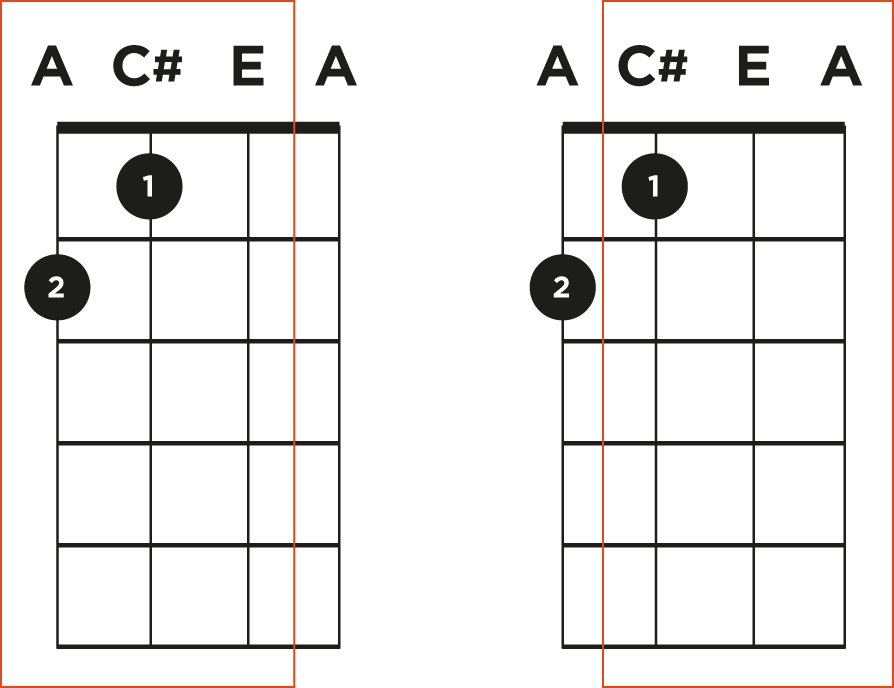 But why is this useful to know?

Firstly, this is really useful to know because it can help you if you find a particular chord difficult to play. Most ukulele players struggle with the E chord, at least to begin with. But you can make it a whole lot easier by not playing and subsequently, not having to fret one of the strings. In fact, I wrote a whole other blog post just for the E chord (and it has a video too) that talks about this very approach.

That’s not the only reason that it’s good to get to know the notes that make up a chord though.

How about some more examples?

In terms of the notes you’re playing here. You have G, C, E and another C on the bottom string. As I mentioned in the example of the A chord, you should be able to hear that 2 notes are the same. In this example, it’s the C on the second string and the C on the bottom string. There is a slight difference when it comes to this version of the C chord though, the 2 C notes you can here are actually an octave apart.

How do I work out the notes in the chord?

So the next thing you need to know is how to work out which notes you need to play. For this, you need to get to grips with the notes in the scale.

Let’s start by laying all of the possible musical notes down. You can see there are 12 available, after which the pitches repeat in a higher octave.

Each note in western music is considered to be a semitone (or a half step), two semitones makes a whole tone. If we translate that onto the ukulele fretboard, each fret is a semitone/half step and 2 frets is the equivalent of a whole tone/step.

Now we have the C major scale built we’re ready to construct our major chord.

Major chords are built from the root note (the note that is the same as the name of the chord), the major third and the fifth. This would give us C, E and G, exactly the notes we need.

Let’s try it again with our A chord.

We start by building the scale. Using A as our root note, we move up using the scale formula from above. This will give us A, B, C#/Db, D, E, F#, G#

Again using the root, third and fifth formula for major chord construction. This gives us…

It does take a little bit of working out but this all comes in very useful as you become a more accomplished player. You’ll find new possibilities and become a much more competent player.

Let me know in the comments if you’ve found this useful!