The e chord is every beginner ukulele player’s nemesis. Players will go to great lengths to avoid playing an E chord on ukulele. It’s not uncommon for people to play an E7 in it’s place or just to transpose a song completely. Check out my guide to helping you get to grips with the e chord…

In a word, no. Well technically you could but you shouldn’t. Why place that restriction on yourself? That’s like saying you’re only ever going to play down strums because up strums are a little bit tricky. It’s hugely limiting to you and your ukulele playing. Get to grips with the E chord and you’ll never need to transpose songs or drop in an E7 that might not work anyway.

Here comes the good news, just like every chord there are multiple ways to play an E (otherwise known as chord inversions) and some are easier to fret than others. It’s a case of selecting the one that fits into what you’re playing and which chord you’re transitioning from. Here’s 3 of them (there are more though)…

Looking at the chord boxes above, it’s the first E chord that usually strikes fear into a players heart. Essentially this version of an E is a D chord shifted up 2 frets. I personally almost never play this version of the e chord they way I’ve shown it in the diagram. More often than not I will play this chord with 2 fingers using my third finger to bar strings 2,3 and 4 of fret 4. It takes a little getting used to, and again I would recommend using the 60 second chord changes method daily to get this version down.

The second version of the E chord shown above is quite different and there’s no barring involved (phew). I’m more likely to call on this shape when I’m coming from a chord that shares similar fretting positions. A G chord is a good example, you get to leave your second finger where it was.

Finally, and in my opinion the easiest way to play an E – simply bar all the strings at fret 4 with your first finger and then use your pinky to hold down fret 7 of the A string (help playing barre chords here). If you’re coming from a bar chord then it makes sense to stay with another bar chord and the transition should be relatively easy. The only real issue with this version is that it can sound a little strange if you’ve been playing open chords before it (but try it and see) and it can also be a bit of a jump moving 4 frets higher.

There are more ways to play an E on ukulele but we’ll stick with those for now. I’d highly recommend getting to grips with each one. Over time you’ll start to find that you develop a feel for which one you should be using in the context of the song that you’re playing. Take a minute every day to work on your e chords – maybe even throw it into your practice routine, you’ll have them mastered in no time!

Extra – the really easy way to play an e chord 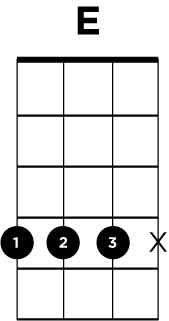 If you’ve read this far then congratulations, your reward for reading on is this rather easy way to play an e chord.

Notice it’s the same as the rather difficult way to play an e chord but this time we’re either muting or just not strumming the bottom (A) string. That’s because it’s not necessary.

Ordinarily we fret the A string at fret 2 giving us a B but as we already have a B note fretted on the G string we don’t need to have another in. You can simply leave it out and you’ve still got an E.