I talked in a post ages back about my desire to draw on a ukulele. Well I’ve finally done it, here’s the zombie ukulele I’ve been working on whenever I’ve had a free moment… 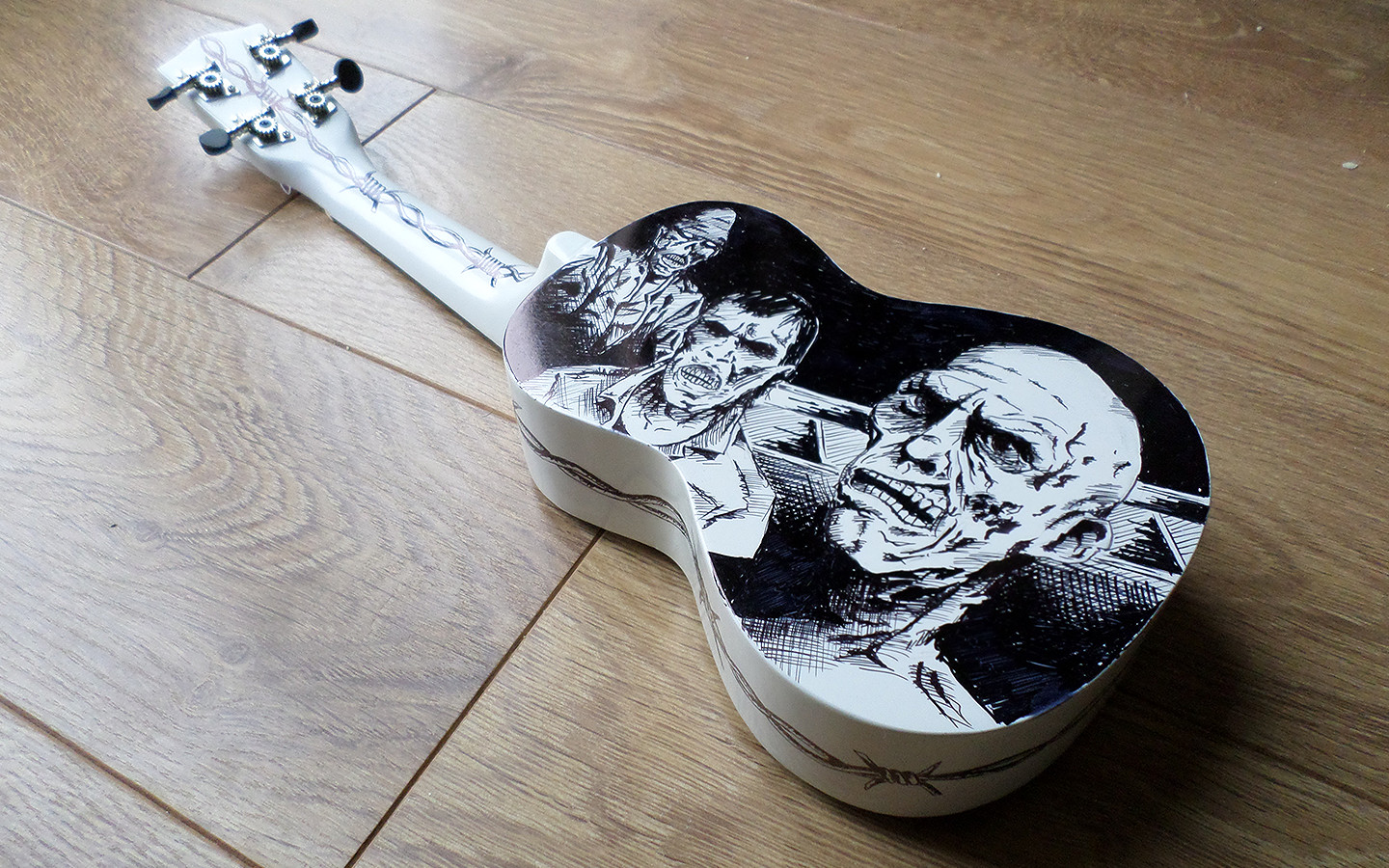 I used a sharpie (or several sharpies) on an Octopus soprano. The guys at Octopus got in touch when they found out I was looking to do some artwork on a ukulele. The Octopus is a great fit for a number of reasons: firstly they’re available in white, they’re cheap and having played one before I know that they’re sound pretty good too. 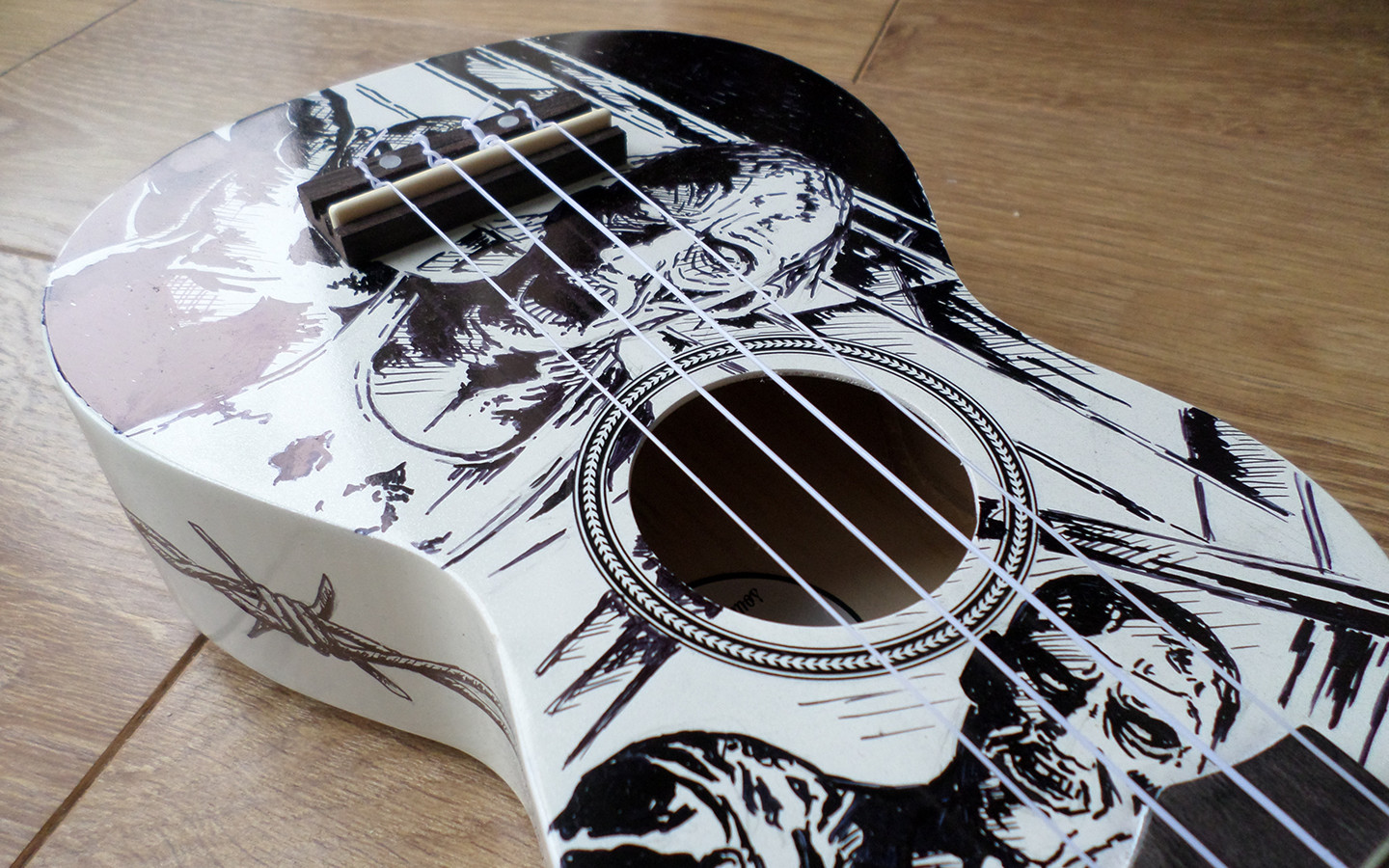 I’ve seen a lot of custom illustration projects on ukuleles but a lot of them tend to be random doodles which isn’s what I wanted. As a big fan of zombie movies (and also The Walking Dead) I figured it could look pretty cool with a zombie theme. Also zombies are pretty forgiving things, you can be pretty rough with your pen work which is a bonus. 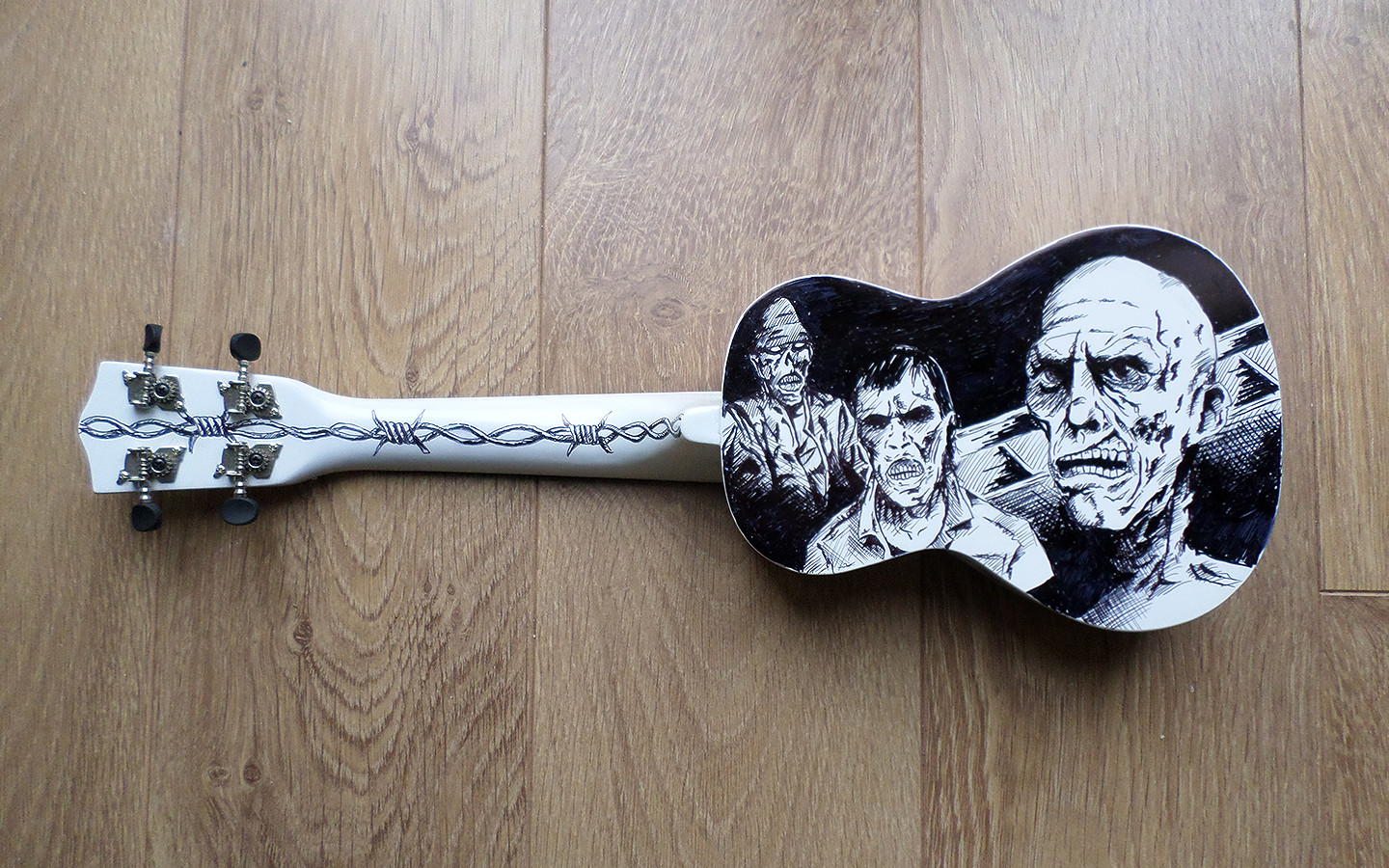 Drawing on a ukulele proved to be one of the hardest things I’ve ever tried to draw on. The sharpie has a nasty habit of smudging and just wiping off if your hand touches the ink. Add to this the fact that the ink seems to stay wet for days and days and it’s really tough going. Most of the time I had to draw with my hand not resting on the uke at all which was a real challenge. 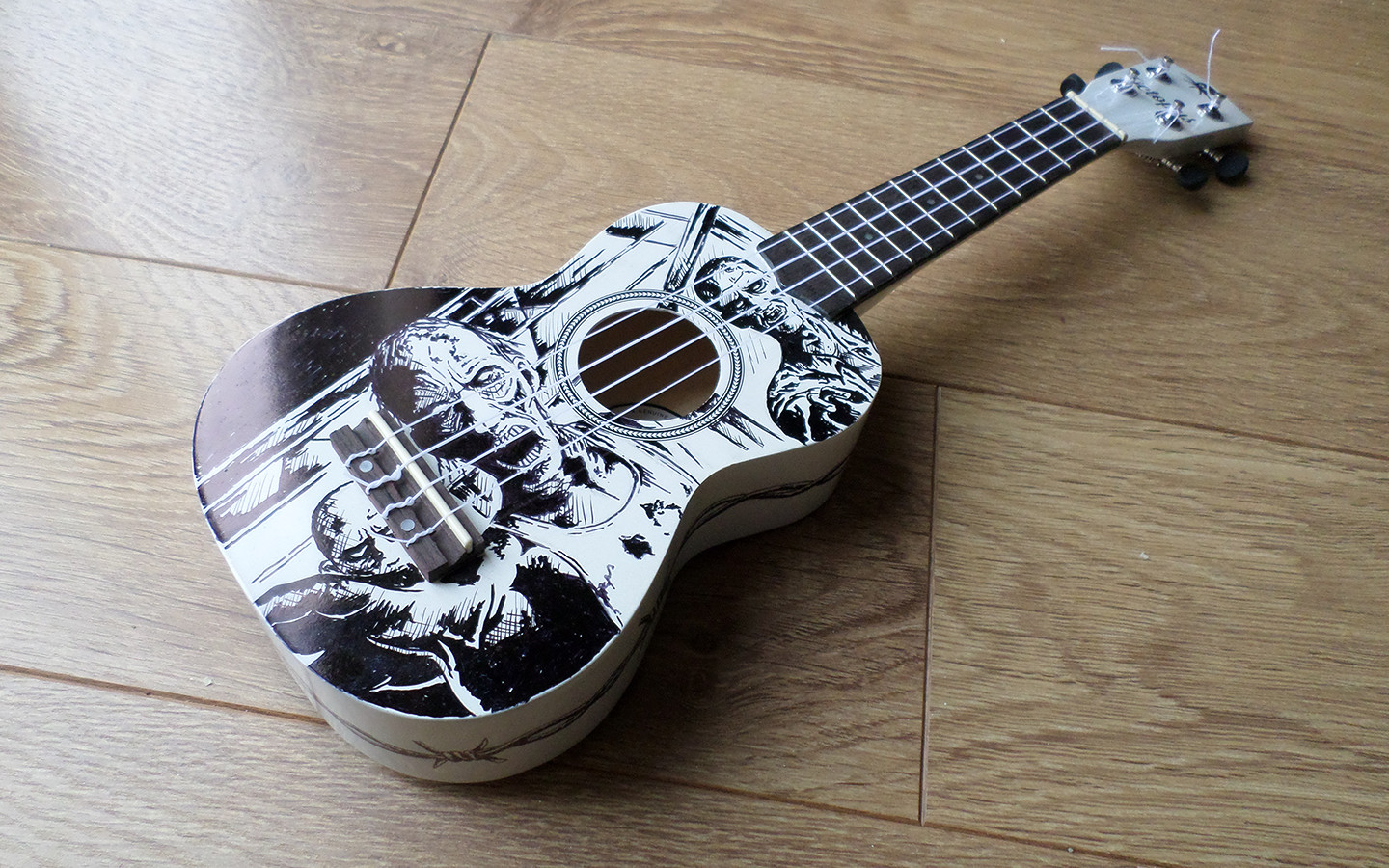 At the moment I haven’t sealed the ink so I doubt it would stand up to being played. I think the heat from a hand and the constant brushing against it would turn it into a bit inky mess in no time at all. I’ve thought about using a clear acrylic spray to seal the ink but it’s not something I’ve done before so I’m not sure. Again, if anyone has any hints on sealing the ink I’d really appreciate it. 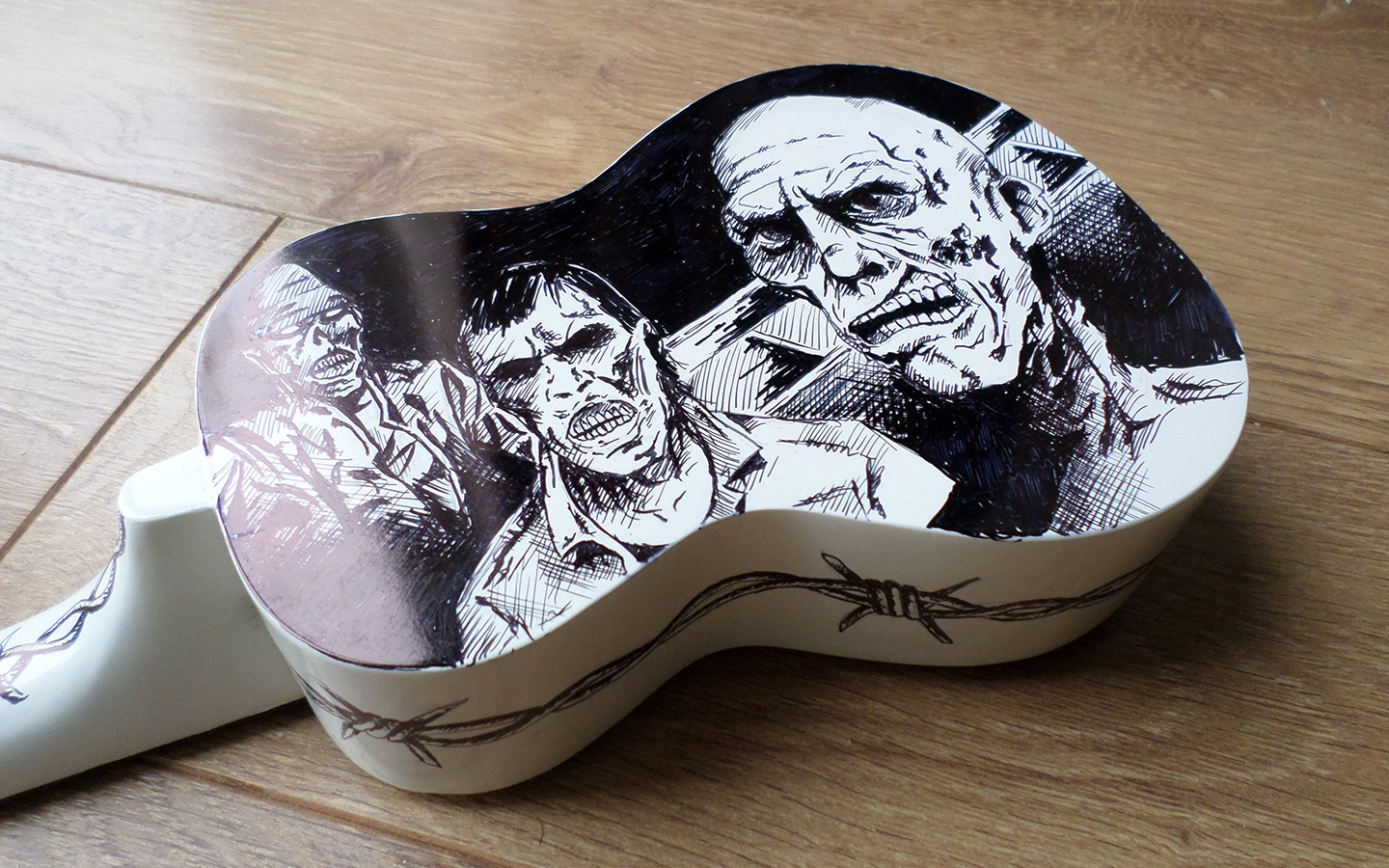 I had planned on making a short video showcasing this ukulele but as it’s been raining pretty much non stop for 2 days now I’ve had to put that one on the back burner. I’ll definitely be doing it at some point though as I learned to play the theme tune from The Walking Dead (thanks to David Lawson) for the soundtrack. 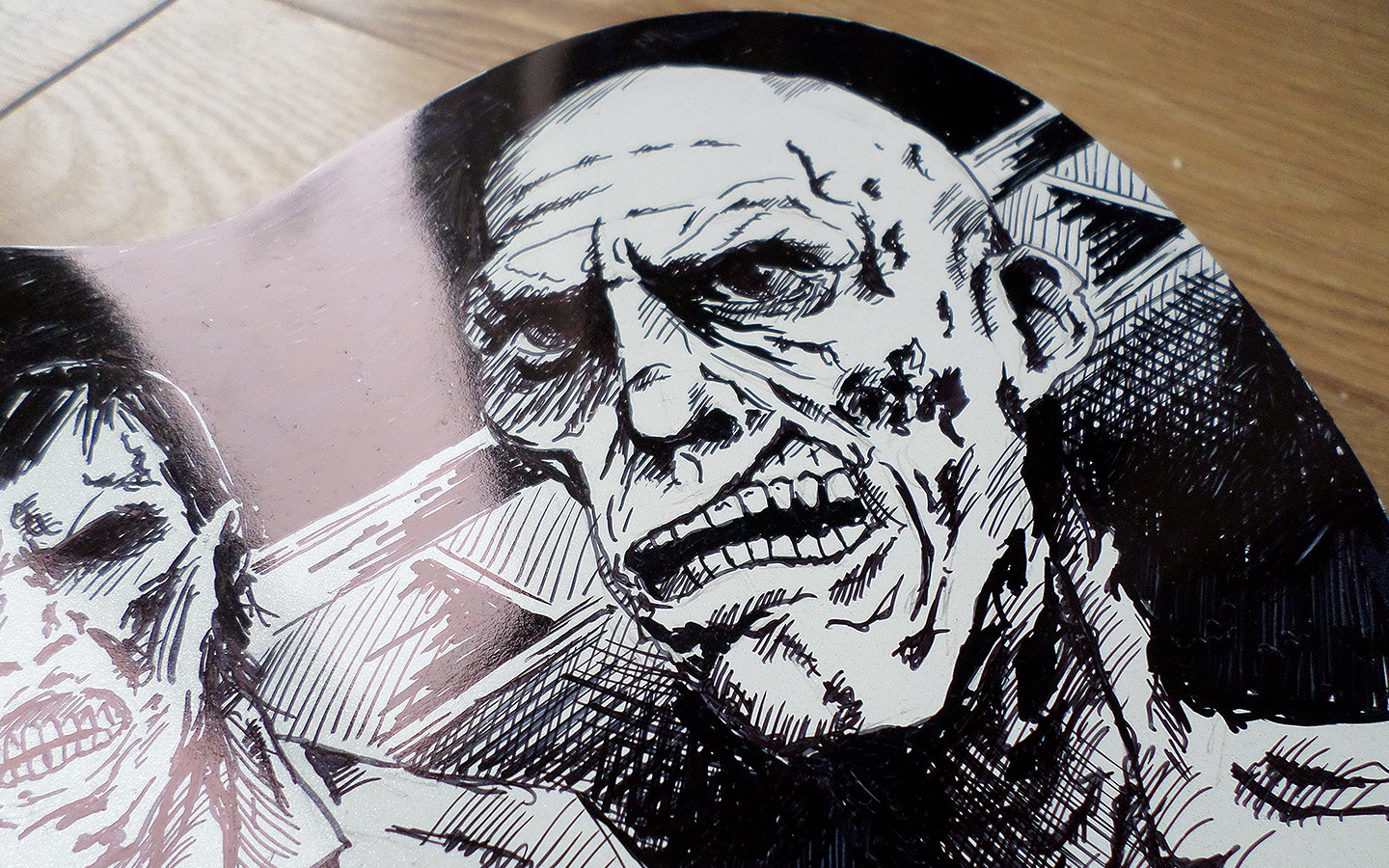 In hindsight I probably should have strung it with some Aquila Lava strings. Black probably would have looked a lot cooler than white but I didn’t have any kicking about.

That’s about it. I hope you like it – I’m not really sure what to do with the ukulele now. Maybe it will go on a wall somewhere, I really don’t know.