Zoë Bestel is a singer/songwriter from Dumfries and Galloway who is never far away from her ukulele. Her debut album Sir Lucas & The Moon, released in April 2014 is filled with poetic songs that are both beautifully delicate and intricately weaved with gorgeous harmonies. Add to that a string of successful festival performances last summer and things are looking pretty damn good for Zoë…

I think it’s fair to say you had a pretty good 2014, what were the personal highlights for you?

There’s been so many brilliant places I’ve visited this year. I played my very first ever ukulele festival, Grand Northern Ukulele Festival in Huddersfield and it was one of the best ukulele experiences I’ve had and cannot wait to be back this year. I also really enjoyed going over to the Isle of Tiree for their music festival which was amazing; after getting back from that, I went straight to Wickerman Festival, and then a couple of days later I headed down to Cambridge Folk Festival, having a birthday in amongst there too.

I also got some absolutely fantastic feedback for my debut album, which successfully launched in April and sold out by December – that was insane. Pretty chuffed with that, haha! Oh and I met Nathan Connolly of Little Matador and lead guitarist of Snow Patrol fame when we played at the same gig and he bought my album and said I was incredible. That’s not too darn shabby either, even if I wasn’t a big SP fan who may or may not have listened to their album on repeat when I was 13…

You must have been pretty elated when Sir Lucas & The Moon was released, how did it feel to complete your first album?

A mixture of excitement, relief and accomplishment. I had been signed to a local independent record label when I released my debut EP in 2012 so there was a chunk of the process that I hadn’t experienced.

There’s a whole bunch of things one doesn’t think about when deciding to release their own album by themselves, like: where to get a barcode, how to get your music on iTunes or whether or not it should be shrink wrapped, there’s quite a bit you have to learn. I had also decided I wanted to do as much of the album myself as possible, so I designed all the artwork. I don’t have the expertise or equipment (yet) to record, produce, engineer, master etc. so that was outsourced to the white wizard Huey Dowling.

There was a panic period a few days before launching when it suddenly hit me that this thing I’ve worked really hard on might not be good. Less than six people including myself, parents and Huey had heard it. What if we’re all biased? Despite having these songs formed and some even performed live, they’re still a little part of me and how I felt at that particular time or on a subject that might be important to me. Still shy songs, still slightly nervous to present them to the world saying “Look, I made this thing”.

In the end it was a learning curve, there was a bit of self discovery in there too but I’m absolutely chuffed with how it worked out and definitely, definitely over the moon with the reception it’s received.

What influences whether you take a song idea forward and progress it?

Whether I’m passionate enough about the song subject or not. I haven’t yet had to discard a song when it has a melody or a couple of lines of lyric. It might sit in my head for a while but will slowly evolve into something. I do however have many song ideas that won’t even get written down.

I could brainstorm for a while but if I can’t visualise it becoming something of meaning, or something I would be happy or like performing then I won’t ever feel passionate about it, so won’t consider it. It sounds harsh, but my passion doesn’t have to be intense, I just want to like the idea enough when I write it to still enjoy playing it in years to come.

How do you see your music developing in the future?

I predict my teenagery intense-ness may influence darker and deeper song subjects, ha! I like the idea of this because it’s likely I’ll write them on a uke and that’s slightly ironic. But in all honesty, I’m not sure. Songwriting wise it depends where I am, how I feel and subjects of the world at the time so I can never guess what will come of those. But career wise I want to travel, sorry, I am travelling and I would be very happy to do more, to completely different far off places.

At the moment I’m enjoying the path I’m on, slowly building a wonderful tribe of humans that like my music, which is wonderful, playing at different festivals; ukulele, folk or not across the country, and meeting new fantastic people. I’m not into fame, I’d just like to be able to do this for the rest of my life, hopefully writing songs that are impactful, or evoke emotion, and travel the world.

A lot of the press around you is focused on your age. How does this affect you (if at all)?

That’s a really brilliant question, it’s a interesting one. When I was younger I guess it was a kind of a selling point and I’d often mention it on stage as well as in press for reasons that I really can’t describe as anything but possible gain of attention. However, now I’d rather my music speak for itself, even without me there at all.

There’s been times when I’ve felt like the opportunities that have come my way could be of out of kindness because of it, especially after reading a comment someone has made along the lines of ‘this is really good, for your age’. There’s been reviews of the album recently though that haven’t once mentioned how old I am and I really appreciate it. With all things, I don’t think anyone should be defined or treated differently because of how old they are and I definitely don’t want it to be a focal point.

I’m off gigging around the UK with big ukulele festival appearances at the absolutely wonderful Grand Northern Ukulele Festival and very pleased to have been asked to play the Ukulele Festival of Great Britain for the first time. I’m also writing, my whiteboard is full of squiggles from my head that I’m hoping will form a musicy creation worthy of singing to you in the not too distant future, but can’t guarantee that. You can keep up to date with what I’m doing on my website (http://www.zoebestel.co.uk) and by joining Team Bestel, my mailing list. 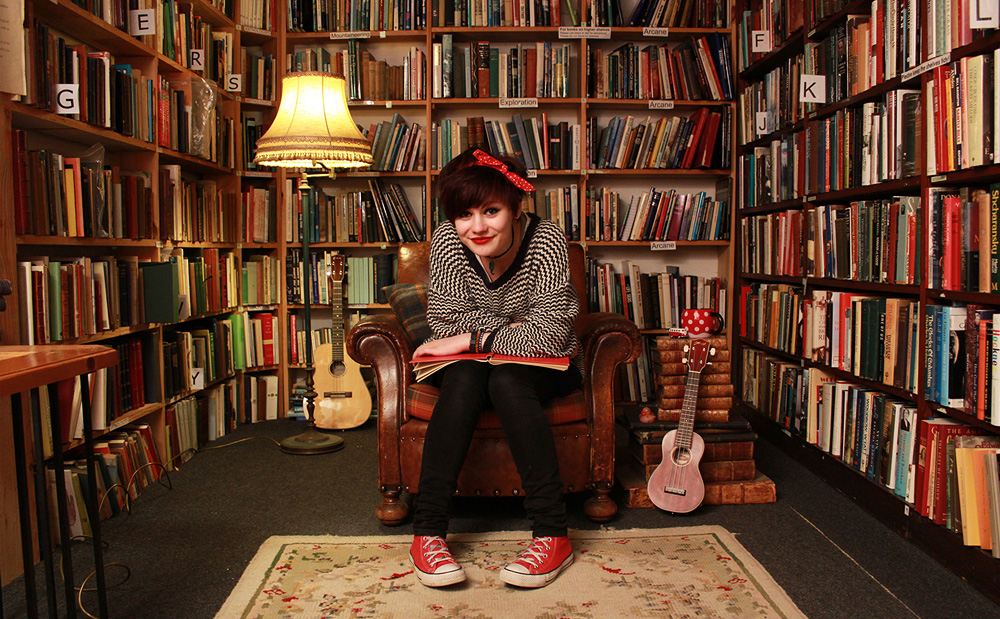 If you could could work with one artist past or present who would it be?

That’s hard. There are some amazing songwriters who I adore the work of, and so many musicians that I’d kill for to pick their brains for even a minute. However, I’ll stick with ukulele…kind of. The first name that came into my head was Eddie Vedder, because not only am I listening to his album as I type but I love his Ukulele Songs and he champions the instrument brilliantly. Plus his melodies aren’t predictable and his lyrics are just…brilliant.

I always wanted to be the front woman of a rock band, maybe that’s why I feel drawn to wanting to work with him, being able to rock the Vedder way on a uke would maybe be as close as I’d get to that little dream, and I’d be perfectly pleased with that.

Massive thanks to Zoë for taking the time out to answer some questions and giving us an insight into her world (and also making me learn how to type an umlaut)! Head on over to Zoë’s website to find out where you can see her playing.