This week we have a guest post from Eduardo at EasyUkuleleSongs.com, over to you Eduardo…

Have you ever momentarily forgotten the combination on your gym lock and had to slow down – a lot – to get the numbers right? Or automatically brushed your teeth in the morning while thinking about what you had to do that day?

If the answer is yes, you can learn how to move between chords just as easy. We’ll go over how to do that using the song “Somewhere Over the Rainbow” as an example.

“Those things have nothing to do with each other,” you might be thinking. But they do! And what’s more, if you can do those things, you could also be a competitive Rubik’s cube-solver.

It’s not! Just hear me out. 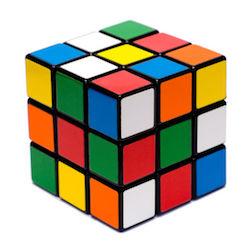 It turns out that it doesn’t take much talent to be a fast Rubik’s cuber: you just have to be able to recognize very simple patterns in the positions of the colours on the cube and perform – using something called muscle memory – a series of repetitive motions to move the squares around.

In other words, Rubik’s cubers aren’t really solving the cube every time – they’re just moving parts of the cube around based on simple pieces of information that “tell” them which motions to do when.

It’s exactly the same thing that happens when a password you want to type on a computer keyboard “tells” you where to put your fingers. The same thing happens when you unlock that gym lock or brush your teeth in the morning.

And, exactly the same thing happens when the words in a song “tell” you which chords to play – if you follow my system for changing chords easily.

As far as your brain is concerned, playing the uke is no different from quickly typing a computer password or brushing your teeth: it’s all about harnessing the power of muscle memory. Changing chords smoothly to play a song on the uke is actually making the same kind of demands on your brain.

To prove it, I’ll show you my system for getting ukulele chords into muscle memory. It’s a little different from what most people usually try to do.

The difference is that a lot of people think building muscle memory is just doing something over and over again until you get it right.

That’s almost true – but people get tripped up because they try to move too quickly at first, and that ends up slowing them way down.

You need to increase your speed gradually, building muscle memory from slow to fast.

Think about it this way: little kids look pretty clumsy brushing their teeth slowly and carefully (and getting toothpaste everywhere anyway). They need to speed up very gradually, a little every few weeks, to get as good at it as we are.

We can use the same idea to learn “Somewhere Over the Rainbow” on the uke.

Now, this song has 5 chords, which seems like a lot. But because of the particular chords used, and the slow speed, it’s a very beginner-friendly song.

Here’s how you can use muscle memory exercises while learning to play “Somewhere Over the Rainbow” in 3 steps.

STEP 1: Find Out and Write Out the Chords

First, I looked up the chords for “Somewhere Over the Rainbow” and made some chord charts for myself to look at while I was learning. Take a look at the video and chord tabs here. This song has 5 chords in all. For this article, we’ll focus on changing between the first two: C and Em.

Here are their charts. (in case you don’t know how to read these, I put some helpful labels on the C chord chart. The numbers inside the black circles stand for your fingers – your index finder is “1,” your middle finger is “2,” and your ring finger is “3”). 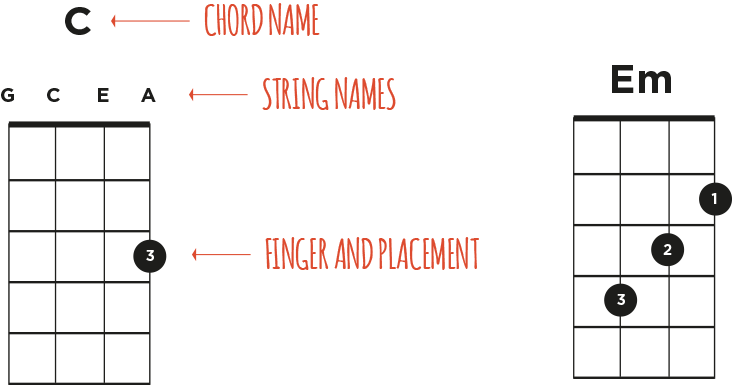 Now, here’s how they fit into the chorus of the song. I always like to make a note of which word a chord change goes over, so I can easily transition into singing as I play. 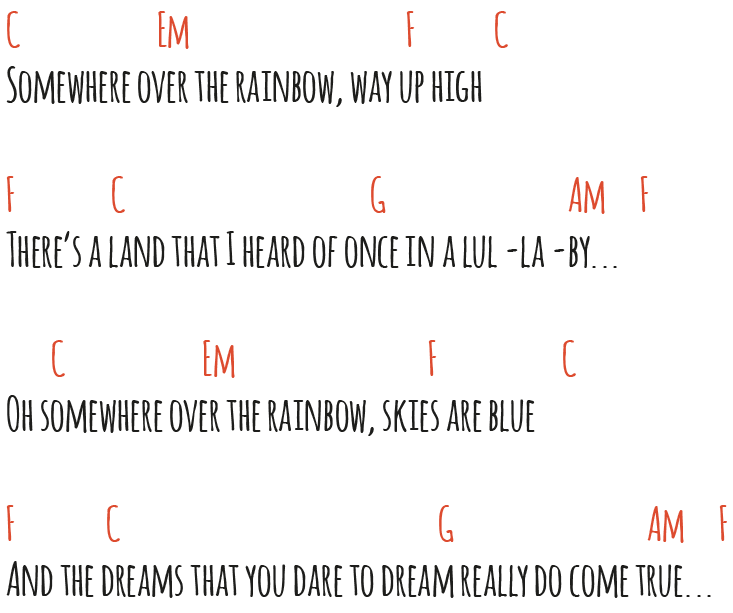 Remember this step-by-step guide can be applied to any song, another song idea for you would be Stand By Me, by Ben E King.

STEP 2: Find Out the Speed and Make a Muscle Memory Checklist

I listened to the music video to get an idea of what the speed was in beats per minute (BPM). I used the Web Metronome to match the rhythm to around 85 BPM. I like Web Metronome because it lets me easily increase and decrease the speed by just 1 BPM!

Then, I chose a much slower speed to start practicing at and created a Muscle Memory Checklist to keep track of my progress.

Now, I was ready to gradually train my brain. Remember: pro Rubik’s cubers don’t go from learning how the cube works to speed-cubing – they increase their speed gradually, shaving a second or two off at a time. I do the same thing when I’m practicing on the ukulele.

Starting with my hand on the C chord, I set the Web Metronome to 60 BPM. Every 4 beats (when the metronome shows a “1” on a red background), I changed chords from C to Em.

When I felt totally comfortable with that (for best results, speed up the following day), I sped the metronome up to 65 BPM. It’s very important to do it this way, increasing by only 5 BPM, not 10 or 15. Most people barely feel this difference in speed, but your brain is making an important adjustment.

After you feel completely at ease with 65, give yourself two thumbs up by moving up to 70 BPM.

One step at a time, I followed my checklist until I was changing chords easily at 85 BPM – the speed of “Somewhere Over the Rainbow.” Instead of trying to start at 85 BPM over and over again, or increasing speed from 60 to a jarring 85, this process uses the science of muscle memory to “trick” your brain into playing at the right speed by starting with a speed that you can play at.

Now that you understand this method, you can see what comes next. Once I got C and Em up to speed, I started working on the next two chords, F and C, starting with 60 BPM and switching every 4 beats. I’ve found that taking the chords two at a time is the fastest way for most beginners to learn, but depending on your skill, you can try 4 at a time instead, as long as you follow the same system.

Just to review, here are the steps again:

Hope you enjoyed this article and that it helps you become better and changing chords. You can learn to play these chords and more with my special ukulele chords video library.

Eduardo Uke is an avid ukulele teacher and podcast host. Want more tips on learning to play the uke easier and faster? Subscribe at his website EasyUkuleleSongs.com and receive a free ebook today called “5 Beginner Ukulele Mistakes (and How To Avoid Them!).

5 thoughts on “How To Easily Change Between Ukulele Chords”