I was watching some harmonica lessons a few weeks back and one those lessons was to restrict your improvisation to a single hole which gives you just 2 notes to play with. It’s a real challenge to try and play something interesting with just 2 notes and it makes you focus more on other things like timing and dynamics/volume. Without a doubt it improves you as a player, so I wondered how that might be adapted to ukulele.

My variation on this isn’t about solo improvisation, it’s about improving your rhythm and making songs sound more interesting and varied. I set about finding songs that have only a single chord in them to set you the challenge of making them sound interesting for the duration of the song.

If anyone has any to add to that list, let me know in the comments and I’ll get it updated.

Put the lime in the coconut

So let’s take Coconut by Harry Nilsson. It’s a C7 chord throughout the whole song . You’re going to need to do something with that to keep it interesting.

Break the song down

A simple method to making a song a little more interesting is to break it down into sections and give each section it’s own strumming pattern. The song coconut is actually just a C7 finger picked throughout but we’re going to change things up a little bit. We’re going to break the song up into the following sections…

So that gives us 3 prominent sections to change things up. As the song is finger picked on the original it makes a good starting point for us for the intro and comes with the added advantage that you don’t have to sing over it (phew!)

Here’s a few versions of the C7 chord that you can use throughout. The easiest one is the one finger on the first fret of the A string. I’ve given you a couple of chord inversions to play with too just to mix things up a bit (if you don’t know what inversions are yet, don’t worry).

This is a really simple fingerpicked pattern that runs in 8th notes (counted 1 & 2 & 3 & 4 &) so you’ll be tapping your foot on the first note and then every other note after that, it makes an effective intro pattern and it’s not too tough to get to grips with. Use your thumb on the G and C strings, your index finger on the E and your middle finger for the A string.

For the verses we switch to a simple strumming pattern, something like this… 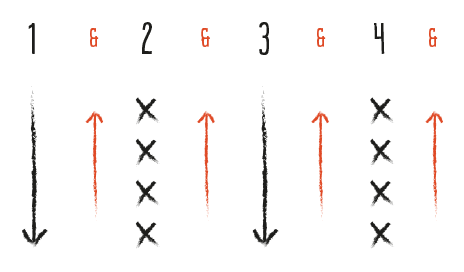 The X’s represent a chuck/chunk strum, if you need more help here you can read my post about chucking.

The chorus is a variation of the above pattern but it’s a little different. Again it’s all about mixing the sound up a little. We need to do whatever we can to keep this one from getting boring. If you want a few more strumming patterns you can grab my 32 strumming patterns PDF here. 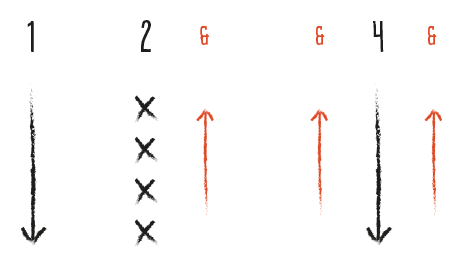 And that’s it. You can add more patterns and variations if you like and you don’t have to follow my approach. Maybe you want to use the fingerpicking section for the verse – it really doesn’t matter, nothing is set in stone. You could even look at throwing some chord inversions into the mix. That’s the beauty of a single chord song – it allows you to get a little creative and start to focus on something other than chord changes. Give it a try, see how it works out for you.

17 thoughts on “One Chord Songs On Ukulele”