It still amazes me that the title of this post holds true. You can play hundreds (if not thousands) of songs using just 4 chords on your ukulele. Read on to find out which chords, why it works and see a list of songs…

If you’d prefer the audio version of this post, you can press the play button above (or subscribe to the podcast here)

The Chords (they’re all easy)

I guess the first thing you want to know is what those chords are. Well let me start by saying the relationship between the chords is I, V, Vi and IV. If that doesn’t mean much to you, don’t worry. In the key of C that gives us C, G, Am and F.

This is probably best shown with the rather brilliant 4 Chords video by Axis Of Awesome.  If you’ve not seen it already (where have you been hiding?) take a few minutes to watch it now.

I was pretty blown away when I first watched that video which I think most people were, hence it’s massive popularity. Here’s the list of songs they manage to get through using just 4 chords…

Ok that might be only 47 and I did say hundreds but Axis Of Awesome had to stop somewhere otherwise their video would have gone on for hours. The truth is there are loads more to go at. Even just noodling around with those chords for a while you’re likely to find a few new ones.

Why do so many songs use the same chords?

Ultimately it’s pretty simple, this combination of chords works incredibly well together. There’s just something that is pleasing to our ears about those chords and that keeps musicians coming back time and time again. The thing that amazes me about it though is that songs can sound so different despite being based on the same formula. It’s a chord combination that crosses genres too as you’ll see from the list of songs above.

No doubt some of you reading this will want a definitive strumming pattern for this one. As most of the songs that Axis Of Awesome play are backed by a piano there’s no exact strumming pattern but if you really want some help on this, you could watch this rather brilliant TED video where Josh Kaufman has a crack at the 4 chord song on a uke…

I’ve set the video to play from the point that Josh starts playing but the whole video is worth a watch if you’re interested in learning.

For the record, it looks like Josh is play the good old-fashioned D DU UDU which looks like this…

If you need some help getting to grips with this rhythm – check out my post on the most important strumming pattern you’ll ever learn.

As I always say though, just use it as a guide. If you’re trying to play 47 songs using the same chords with the same strumming pattern it’s going to sound a little bit boring sooner or later, so experiment with missing some strums here and there to build your own patterns and it will sound so much better for it.

Although Axis of Awesome play the songs using E B C#m and A. Those chords can be transposed into a completely different key as long as we retain the relationship. In the key of G for example the chords would be G, D, Em and C. Try it now using those chords instead, can you still recognise the songs? 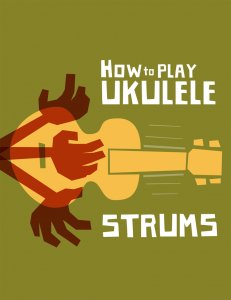